Kim Ezzo swings her way into final season as a Laker 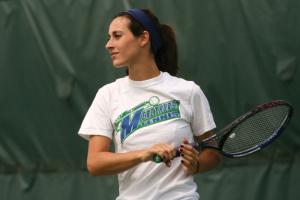 During her time here at Mercyhurst, the Youngstown, Ohio, native has made her mark, and swung her way into record books as a part of the Lakers women’s tennis team.

As a freshman, Ezzo was named First Team All-GLIAC, and led the team with a 16-6 singles record. Ezzo finished her sophomore season 13-7, including going 10-6 at the No. 1 singles spot as well as being named to the All-PSAC West First Team.

As a junior last season, Ezzo again was added to the All-PSAC West First Team and topped the Lakers with a 21-5 mark, and helped the Lakers capture their first NCAA Tournament victory over East Stroudsburg.

She spent her years as a Laker being a “real quite leader” as tennis coach Ray Yost says.

“She lets her racquet do the talking. I will miss having a player in the top position that has the record and respect that she has throughout the conference,” he says.

After four years at the net, Ezzo says she “will definitely miss just being part of a team.”

In high school, Ezzo mainly traveled to tournaments on her own.
“I never really got to be a part of a team, especially one with such talented players,” Ezzo says.

Yost says the most rewarding part of coaching Ezzo is the knowledge that she will spare no effort each time she steps on the court. And in one word, he described her as reliable.

Ezzo wants to be remembered for her sportsmanship and match attitude.

“Records are always there to look at, but people usually forget about the things that players really work hard to control,” she says.