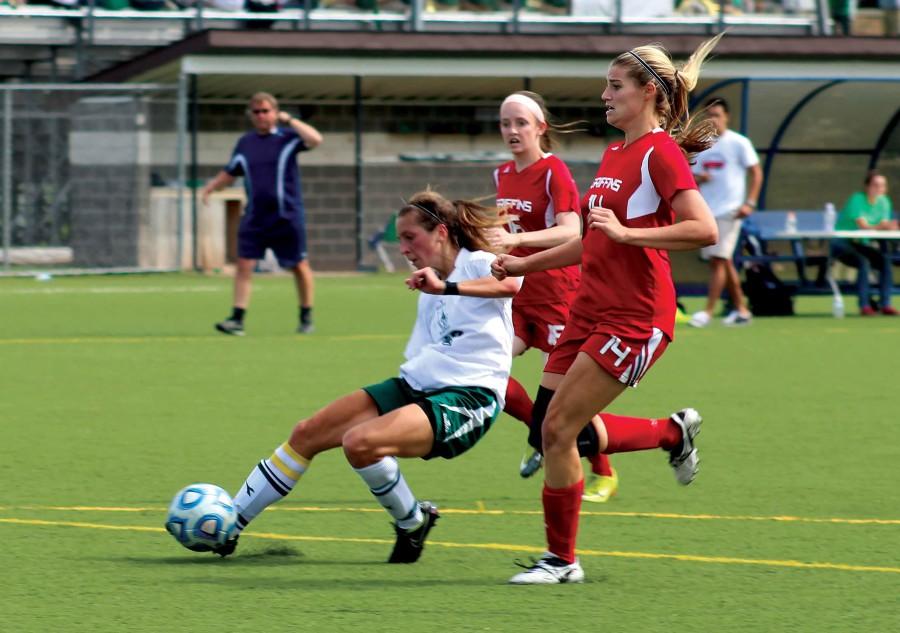 Senior Kristina Roberti (17) scored two goals in Mercyhurst’s win over Seton Hill on Saturday. Roberti has six goals for the season. The Lakers current record is 3-3-2.

The Mercyhurst women’s soccer team defeated the Griffins of Seton Hill University 3-1 in what everyone expected to be a tough game.
From the beginning, Mercyhurst controlled the game, showing intensity in every play. With a long-passing strategy, the Lakers were able to demand a lot from Seton Hill’s goalkeeper. In fact, by the end of the game, the Lakers shot 18 times, against nine times from the Griffins.
However, due to a defense error, Seton Hill’s forward, Emily LoPresti got to score in the 11th minute. This change in the score did not alter Mercyhurst’s strategy.
The Lakers kept attacking throughout the entire first half, but missed clear opportunities to score.
Senior Kristina Roberti, who has been having an incredible season, tied the game for the Lakers, 1-1, three minutes before the end of the first half.
“It’s all about the team, as long as we’re scoring we are good. The team winning is all that matters,” Roberti said.
The second half was all about Mercyhurst. It took only 10 minutes for the Lakers to get ahead of the game, with an impressive goal from senior Lauren Testa. This was Testa’s second goal of the season.
With twelve minutes left in the game finished Roberti scored again for the Lakers, putting an end to Seton Hill’s hopes of recovery.
“Even if the Lakers win with a considerable margin, they have played better in the last games. We have played way better in lost games, we made very poor decisions in the first half,” Head Coach Keith Cammidge said.
Nonetheless, he was satisfied with the game, commenting, “Overall, I am very pleased.”
The Lakers will travel to University of Pittsburgh at Johnstown for their next game on Saturday, Oct. 3. The game is set to start at 4 p.m.