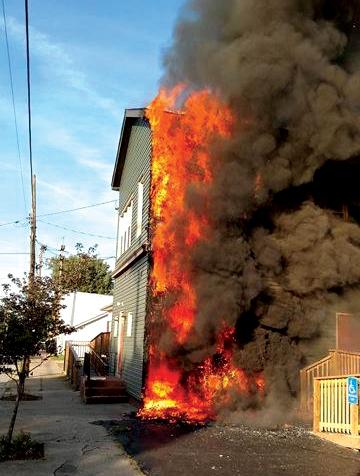 The blaze damaged the sisters’ living quarters most severely.

A fire allegedly caused by a regular attendee broke out at the Emmaus Soup Kitchen and its adjoined house, where Benedictian sisters live and run operations, on Friday Sept. 25.
The fire was allegedly  started by a regular diner, who was caught on a security camera, according to Erie police. It spread from a trash bin on the side of the building and quickly spread through the south east side of the building. This resulted in extensive damage of the complex.
“[I was in] tears. I stood there and watched this building that has housed so many folks for so long in flames. But the Erie Fire Department was tremendous. They saved the entire building.” said Sister Mary Miller, director of Emmaus Ministries.
According to Miller, the sisters’ space upstairs is totally destroyed. The cooking area and dining room were spared.
“I saw a lot of beautiful generosity and hard work going up in flames before my eyes.”
As soon as news of the fire spread, various churches, food banks and city shelters quickly reached out to offer assistance.
“Right now I’m sitting in the office, trying to sift through all the calls and requests for help,” Miller said.
Between their insurance  and construction companies, reporters and people who were eager to volunteer in any way that they could, the sisters had much to attend to, according to Miller, but she said they are grateful for the assistance they have received.
The same day the fire occurred, the Erie City Mission offered its facility to host an open dinner for anyone who needed a meal. The Church of the Nativity also offered its community center as a temporary site for the daily weekday dinners and Saturday lunches that Emmaus provides.
Shasta Mullenax, AmeriCorps VISTA in Service Learning, as well as  two Mercyhurst students, visited the sisters the day the fire broke out.
One of those students was sophomore Jenbli Cox, who regularly volunteers at the soup kitchen.
“It’s sad because the purpose of it is to serve people. There’s still a couple days where people aren’t being served food. Nobody was hurt so thank God for that,” Cox said.
On Monday, Oct. 5, Emmaus will open back up, with smaller seating, but they will be in their own kitchen. They will have no bathrooms, however.
“Mercyhurst has been absolutely tremendous and I rely on the goodness of their hearts and presence,” Miller said.
Anyone wishing to contribute to this cause may go to their website, emmauserie.org, and donate.