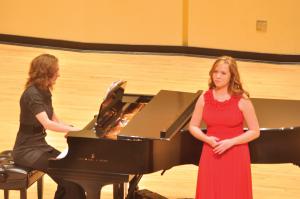 Tyler Stauffer photo: Kirstan Orgel sang a piece by Brahms this Tuesday at Student Forum.Kirstan Orgel, a sophomore music performance major, is a young woman trying to pursue what she loves, with the undying support of both family and friends.

“If my parents didn’t believe in me in the beginning I don’t know if I could believe in myself now,” she said.

Orgel first began singing at the age of three.

A well-rounded musician from Geneva, Ohio, who loves everything from opera to pop music, Orgel became serious about singing in high school.

She says she threw herself into every music ensemble and show she could get into.

The decision to major in music in college was made, and it was quite an easy one with the support of her family and her passion for music.

Through the recommendation of her voice teacher at the time, Kirstan auditioned, and was accepted to the D’Angelo School of Music.

When asked how she balances the stress of academics and her musical development, Kirstan says, “I do the best I can, taking everything one day at a time through the help of a few, great friends.”

Orgel says this piece was chosen for her by her vocal instructor so as to better familiarize herself with singing in the German language.

At the recital her voice sounded beautiful, light and innocent.
The piece told of longing for love, loneliness and comparing herself to other girls.

Throughout the longing felt in the piece, it is difficult for an audience member to believe that this beautiful girl in her beautiful red gown and wavy blond hair would be experiencing such feelings.

But such is the beauty of the stage when you can take on a role completely unlike your own life and make it believable to your audience. And this is exactly what Orgel does.

And for Kirstan Orgel, her family’s support has helped her to become the performer that she is today.

It is their help, her strong perseverance, and her love for music that has brought her to the stage, and molded her into the performer she is today.