New professor is more than a designer 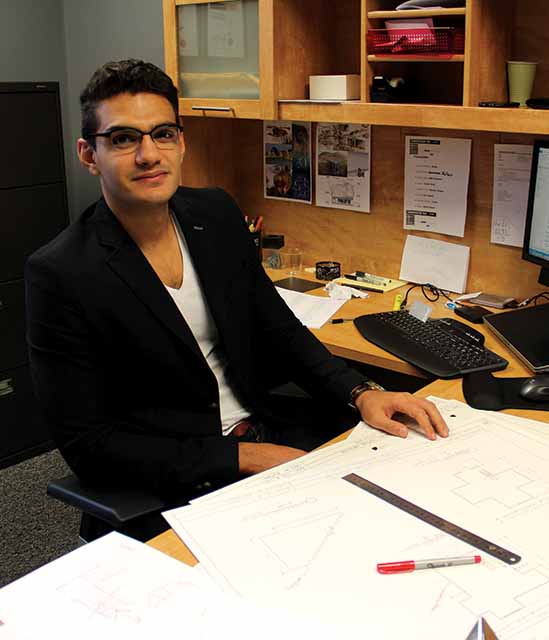 Keyman Asefi is the newest faculty addition to Mercyhurst’s Interior Design Department.
Asefi has a background in architecture and has studied in Kuala Lumpur, Malaysia. While in Malaysia he worked for GDP Architects, where he helped design large scale developmental projects. He has also worked in Korea and Singapore.
Asefi grew up in Tehran, Iran, watching his father, who is a developer. Asefi grew up around construction sites and this influenced his decision to become involved in the same field. Unlike his father, however, Asefi desired to become a building designer.
Asefi received his master’s, on a full scholarship, from Southeast Missouri University and taught there for about a year and a half after receiving his degree.
Currently, Asefi is working a personal project called ‘Designing A Sufficient Building Module,’ which he has been working on for the past two years. This project was intended to designed a society that is self sufficient and void of all technological advancements.
“This project is one solution to our world’s environmental problems” Asefi said.
The concept for his self-sufficient society came from beehives and flowers.
“Beehives are one of the most sophisticated structures created by another species. From the repeated hexagon that creates the beehive, you will begin to understand the flower structure,” said Asefi. “I wanted to create more than just a building, I wanted to build a new culture.”
Another project Asefi has been working on is a vertical church. The inspiration behind this project came from his desire to get more children involved and interested in church. To do this, Asefi designed a church that had slides incorporated into its architecture.
In the concept, the church has three floors that would be designated for children of different age groups. The younger children are on the lower floors with shorter slides. As the children get older, they move to higher floors with longer slides. This fun addition to the church is meant to act as an incentive for children to get involved and go to church.
Asefi first decided to come to Mercyhurst, because he wanted to get his Ph.D. so he could finish his ‘Designing A Sufficient Building Module’ project, but he ended up taking the job at Mercyhurst.
“I took this job to get to know students. I want to open up the minds of my students to enable them to be able to turn their ideas into reality.”
For more information about Asefi’s other projects, visit www.keyman-asefi.com.