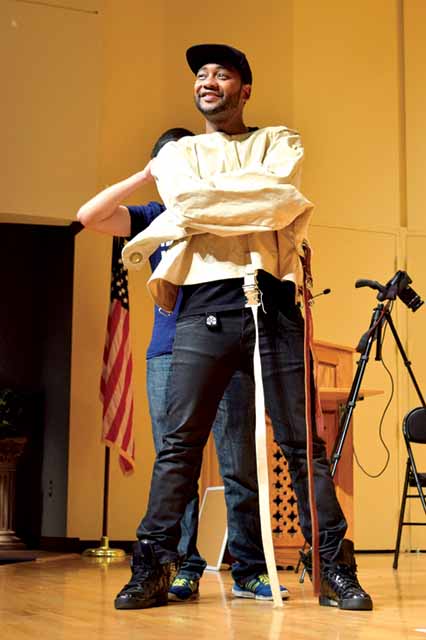 Illusionist David Boyd aka Kid Ace wowed audiences on Friday, Sept. 25, during his show presented by SAC and MAC.
This highly interactive show opened with Boyd introducing himself while making a bowling ball appear out of thin air and during water into wine.
In one of the acts, Boyd had an audience member write down a dollar bill’s serial number on a white board for everyone to see. Three oranges were then brought out and the participant chose one of the oranges. To everyone’s surprise the same dollar bill was pulled from within the orange the participant chose.
After that, Boyd performed one of the most well-known magic acts of all times, Houdini’s straitjacket escape.
The last act of the show was favorably received by the audience. In the beginning of the show, Boyd wrote something on the white-board and did not show it to the audience till this final act.
First, he threw around a rolled up paper ball to random people and they had to tell him whether they believed in destiny or free will. He had the person who believed in destiny come up to the stage. Then, he had her choose a book she wanted him to use in the act. He had her look through the book to ensure it was a real book and had her  chose a random page, and got a playing card with a slit in the middle.
He moved it over the page and had her check which word it landed on. Boyd then pulled out the white-board, which he revealed to the audience. On the board was written “58/2.” The participant was then handed a dictionary and on page 58, the second word of the page was the same word she had chosen in the book.
Many audience members were impressed, including senior English major and Mercyhurst Student Government President Caleb Ohmer, who was truly blown away.
“I loved the show. It was great. I really liked the straight jacket because I’m a Houdini fan,” said Ohmer. “I was surprised he got out of it. Also, I’m happy he did a video camera on his hands; it verified it upfront and makes us mystified by his tricks.”
Boyd kept the attention of the audience throughout the show. The audience never lost their enthusiasm for what he was doing. He maintained a high level of energy, a very personable demeanor and was always trying to get to know the audience.
At the end of the performance, he stayed to get pictures with those who wanted meet him.