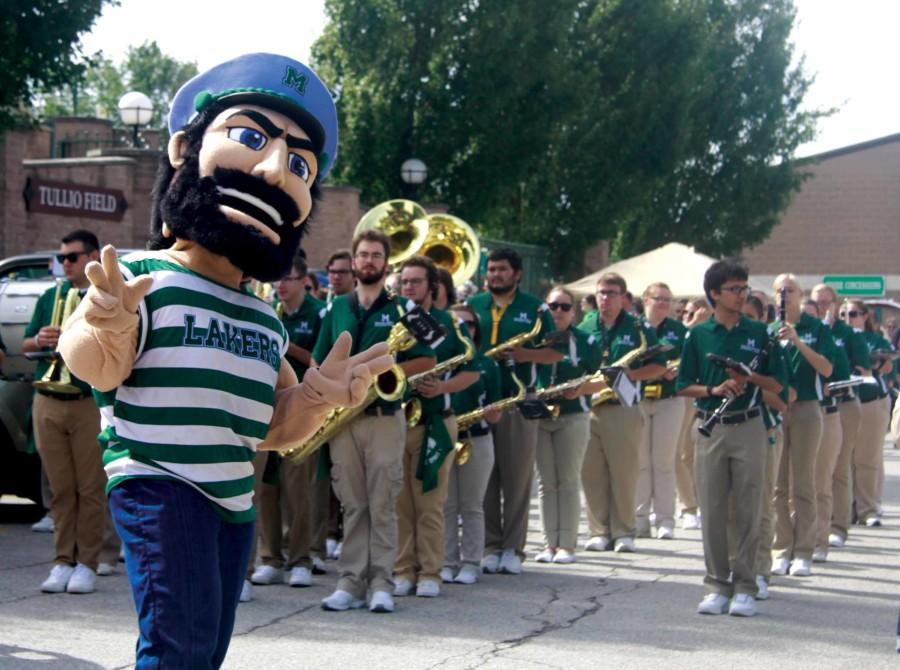 Luke the Laker poses with the Mercyhurst band.

The Mercyhurst community came together on Saturday, Sept. 26, to celebrate Homecoming weekend.
The majority of the events were concentrated in the vicinity of Tullio Field and Munson Park, with the preparation for the festivities beginning on Friday morning at the lot outside the Ice Center.
The Multicultural Activities Council (MAC) chair, Samantha Collier,  credits the success of homecoming weekend as a combination of the hard work done by Student Activities Council (SAC) chair Samantha Beckas, Mercyhurst Student Government (MSG) Events Coordinator Garrett Erwin, Student Government, the Student and the Multicultural Activities Councils (MAC) as a unit, and herself.
“It’s all about what being a Laker is. The importance of the Mercyhurst community, and the culture that is around,” Collier said.
The weekend festivities began with a 5K run early Saturday morning, one of the many events on the schedule. The event-planning team also established a brunch with new President Michael Victor to re-integrate the alumni into the community.
Collier said the alumni make the event very special and she was elated by their support.
“We try not to expect anything because it changes in the blink of an eye, but when you go to Mercyhurst, we are all together, we are all one unit, and that’s what I love about it so much,” Collier said.
“It’s such a small college, and you meet all of the people around you, so when you have events like homecoming, Mercyhurst does it correctly, because we all know and love each other.”
The tailgate set the stage for the remainder of the day’s festivities. The events and homecoming game brought nearly 3,500 people to Tullio Field.
Although, Indiana University of Pennsylvania beat Mercyhurst football team, 35-14, Collier was pleased to see the support the team received.
“I think it’s awesome.” Collier said.  “I think they did it so well this year, I think everybody really came out to support the football team, which I love. We have a great atmosphere, everybody was super-supportive, everybody did a great job.”
Of the eight court members, senior Sports Medicine major Joey Miller won Homecoming king and senior Interior Design major Roxanne Oglesby won queen. Miller was enthralled by the support he had received in his 3-week campaign, the first official campaign to ever take place for a Homecoming title, complete with fliers and buttons.
“It takes a wrestling team and a lot of friends. I couldn’t have done it without those guys,” said Miller.
“Joey campaigned more than I did,” said Oglesby. “I just went along with that, but all his friends campaigned for him. It was exciting, my friend won with me.”
After the football game, everyone filed out of Tullio’s South stand to the Homecoming festivities. Student Government, SAC and MAC
invited everyone to the Fall Festival at Munson Park, complete with tables abundant with food and a variety of activities on the front lawn of Baldwin.
There were many activities available, including a raffle, balloon-artist, hip-hop disc jockey, caricature artist and an artist who juggled flaming torches.The alumni also brought their own events, including a game of cornhole.
The campus awoke to the annual prank-filling the fountain in Munson Park with soap, which was mostly cleared out by the time Fall Festival began.
Collier is she was pleased with her work and optimistic about this event in the future.
“I think this is going to go amazing in future years,” Collier said.
The beautiful weather and Mercyhurst Athletic Band added to the all-around positive feeling of the event.
“We are showing a family kind of pride. We’re showing a love, we’re showing hope for our future. We are showing the spirit of Mercyhurst [that is] merciful, and loving, and accepting,” Collier said.