Lenhart dreams of being Miss America 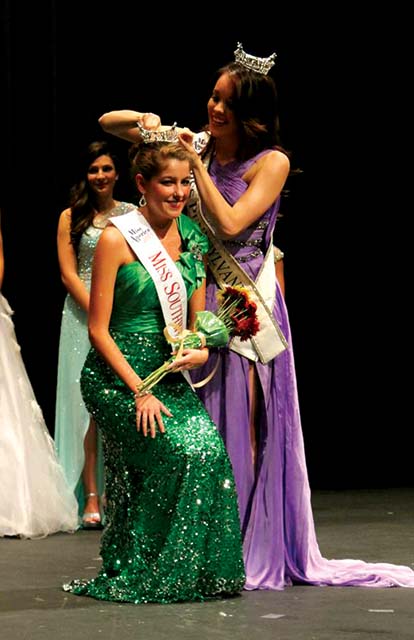 Lindsey Lenhart has served as Miss Southwestern Pennsylvania for a year. She hopes to one day be crowned as Miss America.

Mercyhurst senior and Applied Forensic Science major Lindsey Lenhart is at the end of her reign as Miss Southwestern Pennsylvania.

Lenhart is part of the Miss America Program, which has maintained a tradition of empowering young women to achieve their personal and professional goals, while providing a forum in which to express their opinions, talents and intelligence.

Her time as Miss Southwestern Pennsylvania allowed her the opportunity to compete for Miss Pennsylvania, in hopes of becoming the next Miss America. In November, she will be handing over her title after wearing the crown for a year.

After competing in the Miss Pennsylvania pageant in June, Lenhart won the Children’s Miracle Network Miracle Maker Award and the Miss America Organization Community Service Scholarship award. She was awarded with $1,250 that went toward her education.

“When they choose you for these scholarships, they only choose one per state,” Lenhart said.

“It’s based on how much funds were raised for the Children’s Miracle Network and how much you give back to the community.”

Miss America Organization works with Children’s Miracle Network to raise funds and awareness for children’s hospitals across the United States and Canada.
After winning her title on Nov. 8, 2014, Lenhart dedicated her time giving back to her community in Saegertown, Pa.

Lenhart has attended community events such as parades, festivals and baseball games as part of winning Miss Southwestern Pennsylvania.

Recently, Lenhart volunteered for the Music for Miracles benefit to help support Saint Vincent Hospital’s Children’s Miracle Network Department. She has been volunteering at the hospital throughout her reign as Miss Southwestern Pennsylvania.

“I had the opportunity to meet the Saint Vincent’s 2015 Miracle family,” said Lenhart.

“It was nice to see that the money raised went to such a great family.”

Saint Vincent’s Hospital is not the only place Lenhart volunteers at, she is an active member of Mercyhurst’s Circle K Club and has been actively volunteering at the Kiwanis Club of Erie. Lenhart has helped build dog toys for the ANNA Shelter, has sown blankets for Offices of Children and Youth and volunteered at the March of Dimes.

She was awarded with a certificate from the Commonwealth of Pennsylvania Department of Military and Veteran’s Affairs for her volunteer service in the program.
Coming from a, “one stoplight town,” Lenhart  dreams of becoming Miss America one day.

“The woman chosen must excel in service, style, scholarship, and success, which are the four points on the crown,” Lenhart said.

Lenhart plans on graduating with an Applied Forensic Science degree and obtaining a job with the FBI.