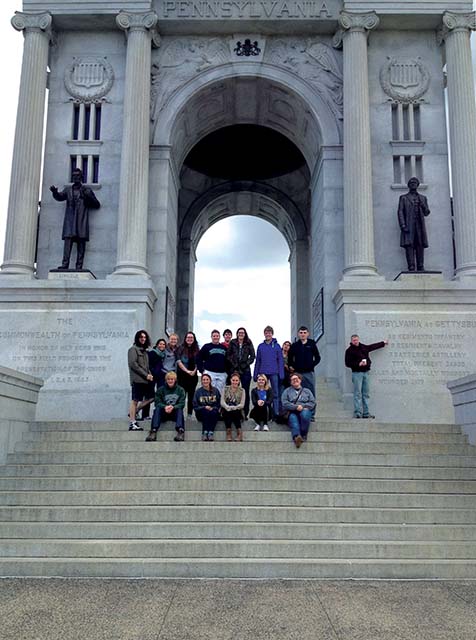 Public History students visited the Pennsylvania Memorial at Gettysburg National Military Park. For three days, students toured some of the most significant Civil War sites in the country.

Mercyhurst students traveled to several historical sites to learn about the importance of the civil war and its relation to slavery over fall break last week.
The trip was held in connection with the “Introduction to Public History and Museums” class, taught by History Department Chair Chris Magoc, Ph.D.

The trip was sponsored by the History Department, allowing history club members and graduate students to also go on the trip. A total of 17 students and two faculty members made up the traveling group.

The course introduced students to museums, historic sites, National Park Services,  the interpretation and preservation of American history and how that is done by professionals. They also learned about interpreting challenges that professional practitioners face in the museum world.

To Magoc, one of the focal points of the course was the history of the American Civil War and related issues of slavery and racism. This in turn became the focal point of the trip.
They left Mercyhurst early Thursday morning, with their first stop being the Antietam National Battlefield in Sharpsburg, Md. The Antietam battle is considered “the bloodiest single day in American history” where more casualties occurred than on D-Day.

Students received an interpretation talk from one of the park’s chief rangers about the challenges of interpreting slavery on the battlefield at a site where people are accustomed to hearing only about the battle.

Magoc explains that about 10 to 15 years ago, historical museums and sites around the country began addressing the issue of slavery. Antietam in particular, was an important political site, because of its impact on the abolition of slavery.

“They incorporated that into the story now and they identified those African Americans by name. They talk about how Antietam was an important battle that allowed President Lincoln to sign the Emancipation Proclamation, which freed slaves of the South,” Magoc said.

On Friday, the group visited Harpers Ferry National Historical Park in W.Va. Harpers Ferry is a historically preserved town, where the Confederate and the Union armies met eight times during the war.

“It was a bloodily contested, important, strategic area for both the Union forces and the Confederates,” Magoc said.
Before the war, the federal government built an arsenal to store weapons. This was why abolitionist, John Brown, considered an extremist by many, led an attempted insurrection in 1859 to free the slaves, to end slavery and the begin the “cleansing of America’s national sin.”

Students were present on Oct. 16, which was anniversary of John Brown’s raid. They received an interpretive talk about John Brown and the raid. Senior Archeology major Emily Esteban-Baughman saw Harpers Ferry as her favorite site of the trip.

“It was a lovely day, it was very interesting to learn about John Brown and the food was great,” said Baughman.

Harpers Ferry is also known as the site where the second meeting of the National Association for the Advancement of Colored People, the first civil rights organization, took place on 1906.

After visiting the historical sites, the group climbed the Maryland’s Height mountain located near the town. In this mountain, soldiers hauled heavy artillery during the war.

“For me, as an old guy to be climbing that mountain, huffing and puffing. Imagine those guys hauling a five or six ton cannon,” said Magoc.

On Saturday, the group arrived at the Gettysburg National Military Park in Gettysburg, Pa., their third and last stop for the trip. Visiting the Gettysburg museum was Magoc’s favorite and most rewarding part of the trip.

“One of the greatest museums I’ve ever been to. One of the most powerful experiences,” Magoc said.

After visiting Gettysburg, the group drove back to Erie. Magoc considered the trip as hugely successful, rewarding, educational and an overall fun experience for the students.

“I’ve been here for almost 18 years and I think this was probably the best trip,” said Magoc.

“Students were paying close attention to how the issues of slavery and race are interpreted at the Civil War sites and I think they learned an awful lot. … It was just a really fun group of students. We had a blast.”

The trip will take place two years from now when the next class is offered in the fall of 2017.