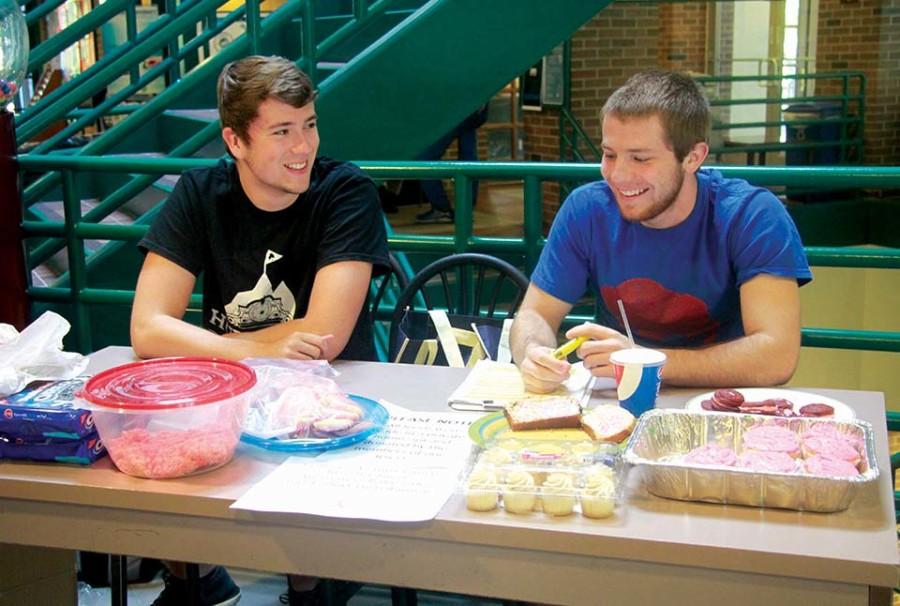 As part of Pink Week, College Against Cancer hosted various events to bring awareness and raise fund for breast cancer.

The Mercyhurst chapter of Colleges Against Cancer is bringing Pink Week to campus.

The club’s goal is to promote cancer awareness through research, risks and treatment. They lend support to those that are battling and those who know someone who has battled or is still battling cancer. This year, the club is focusing on fundraising for cancer research and treatment.

After Michael Grasso, assistant director of Residence Life, took over as advisor of Colleges Against Cancer, and is responsible for the fun-filled week devoted to raising cancer awareness, known as Pink Week.

Pink Week kicked off on Sunday, Oct. 18, with the Paint the Campus Pink event. Students and staff decorated campus with pink ribbons to honor Breast Cancer Awareness Month. The Pink Bake Sale and the Pink Week shirt distributions were held on Monday and Tuesday.

On Wednesday, Oct 21, the “On Wednesdays We Wear Pink” event took place, where students were encouraged to wear pink.

On Thursday, “Fancy Pink Lemonade” will be distributed around in decorated cups with facts about breast cancer. The week-long event will wrap up on Friday with a women’s hockey game against Princeton at 3:00 p.m. senior Archaeology major and Club President, Brianna Flynn encourages students to also wear pink to the game.

“We also encourage students to attend the Women’s Hockey game this Friday and wear their shirts,” Flynn said.

By hosting Pink Week, CAC is hoping to get students involved in breast cancer awareness. Eventually, the group hopes to make Relay for Life, a walk to raise funds for cancer, the biggest event on campus. It is also the biggest event the CAC sponsors and the most well-known, Grasso said. Relay for Life will take place in Garvey Park April 23, 2016.

“In the past it had been a great event but it was one of many events held during the weekend and was seen as more of a club activity,” Grasso said.

Grasso believes that each year, Relay for Life is moving further away from this notion. He has seen that for several years now, Relay for Life has been turning into a tradition for students and staff at the university.

“At other schools, Relay is huge and it is a campus tradition,”said Grasso.

“CAC has high hopes for this year’s Relay and is hoping to raise lots of money for the cause.”

In the coming months, the club is hoping to host a snowball fight or a snowman building contest.

“I think it’s the one time I’ve ever hoped for snow here. We’re also collaborating with the Dance Department with their November showcase for breast cancer,” Flynn said.

According to Flynn, the club is still relatively new and not a lot of people are aware of its existence. They hope to recruit more members during the spring.

“We have a lot of people in our club who are very outgoing and are good at getting the word out. We try to make a lot of flyers for our events.. We really turn the recruiting into overdrive in the spring, though, when we’re preparing for Relay, just because we want to make that event as big as possible,” said Flynn.

“This year, we’re hoping to hold a Relay kickoff event in December before Christmas break. Sort of a de-stressing, but still get Relay out there event.”

For now, CAC hopes to see all of the campus participating in Pink Week while showing some Laker Pride and helping out for a good cause.