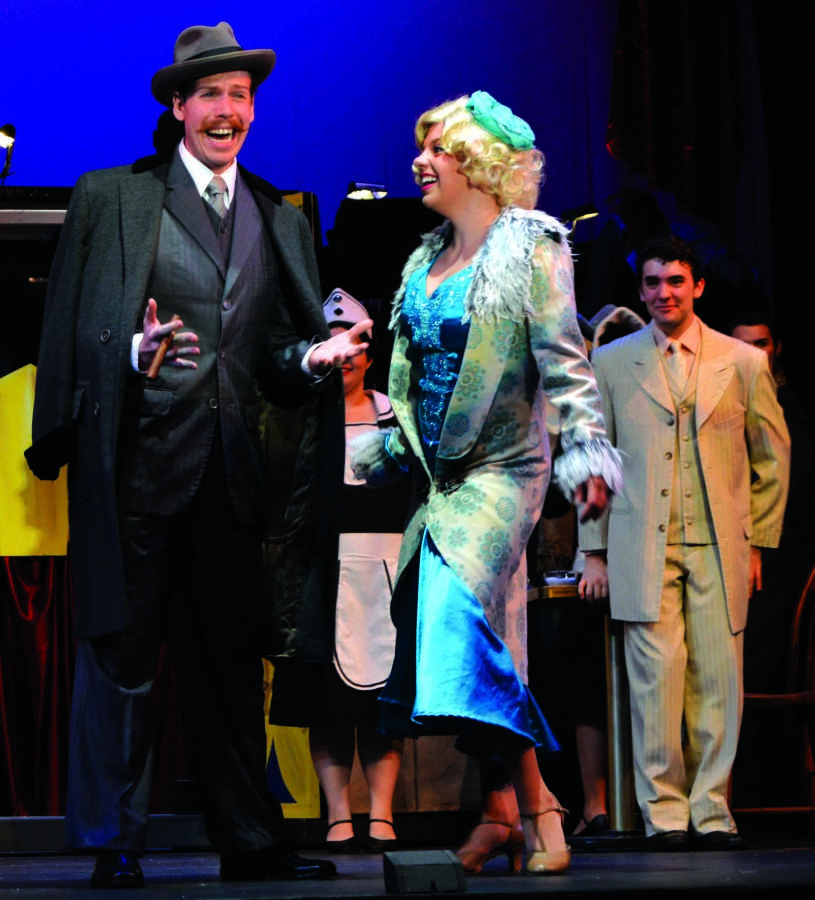 Mercyhurst’s Theatre Program delivered several performances of “The Drowsy Chaperone” to packed audiences of students, professors and Erie community members in the Taylor Little Theatre.
“The Drowsy Chaperone” is a musical comedy that captures the essence of 1920s theatre within the context of our modern society.
The musical begins with the voice of the unnamed narrator projecting from the blacked-out stage.
As the lights brighten, we see that the setting is the living room of an elderly musical theatre aficionado.
Since “The Drowsy Chaperone” is essentially a musical within a musical, the narrator’s running commentary provides the audience with hilarious background information on the fictional actors who originally played the characters.
His narration, as well as his comical opinions, continues throughout the show as the characters and the plot of his favorite musical come to life in his living room.
Directed by Brett Johnson, Ph.D., the Mercyhurst Theatre Program delivered flawless and stellar performances.
Their actors represented their character brilliantly and brought their own styles to the table.
Two of the actors that wowed the audience with their stunning comedic timing and character representations were Michael Rowe, who played Man in Chair and Luke Ballantyne, who played Aldolpho.
Ballantyne’s character, Aldolpho, illustrates the 1920s musical depiction of a buffoon-like European.
He is overly confident in all matters of life, including his ability to woo women and is oblivious to reality.
As “The Drowsy Chaperone” is a parody of 1920s musicals, Aldolpho is an exaggerated representation of the racial and ethnic stereotypes those musicals perpetuated.
Though writers in the ‘20s were ignorant to the offensive nature of characters such as him, the writers of “The Drowsy Chaperone” purposely meant to make a satirical statement with this character, while also using him as one of the main comedic characters in the show.
The show aimed to faithfully capture the vaudeville vibe of old musical theatre. The show transported the audience back to those days and the kind of entertainment that the audiences back then would have appreciated.
The show also did many things that helped bring the production to life through the use of lights and sets.
The musical starts with Man in Chair turning on an old record of “The Drowsy Chaperone.”
As the overture continues to play, and the static clears on the record, a portion of the wall of the set disappeared, revealing a real jazz band behind it.
This unique feat of stage magic made the audience feel as if they were really a part of the action happening on stage.
The cast and crew also made good use of the sparse set pieces.
With the main setting begin the living room of the Man in Chair, the set pieces had to coordinate with what would already be available in his apartment as the musical is coming to life.
With interesting pieces that folded into and out of walls, turned inside out to reveal something new, disappeared entirely or came flying down from the ceiling, the sets brought to mind the over the top nature of the old vaudeville acts of the 1920s.
Overall, the cast, orchestra, production staff and guest artists who made “The Drowsy Chaperone” possible also made it impossible to leave Taylor Little Theatre feeling anything but delighted.
Though the show represents some important aspects of stereotyping in old theatre, it also exhibits the qualities that musical fans miss from 1920s theatre, including its ability to transport the audience to an entirely different world of fun, laughter and excitement.