Ambassadors club: on the process of pledging 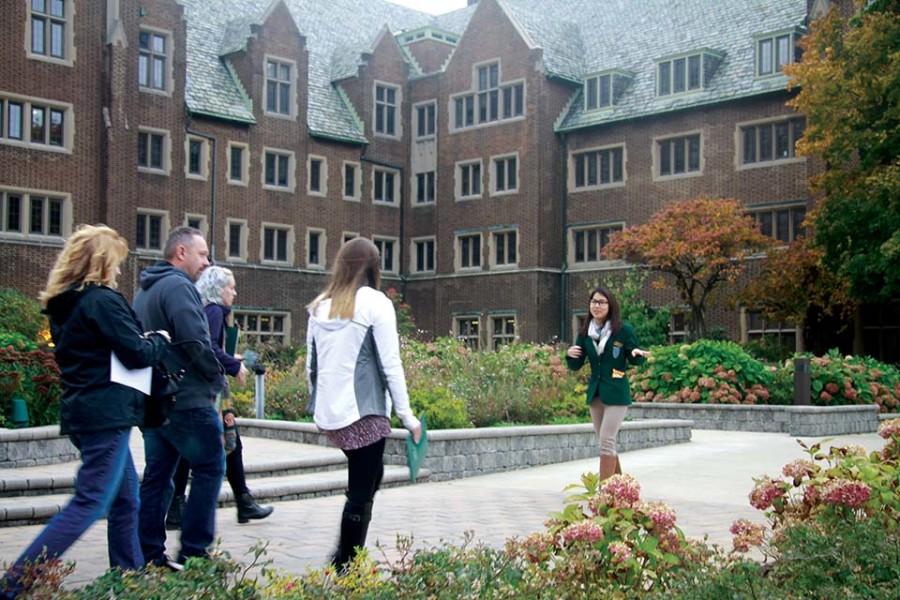 Phuong Vu gives a tour to prospective students and his or her families as an Ambassador.

Mercyhurst University’s Ambassador Program is in its annual process of adding new members, with at least 60 student pledges in the process so this year.

“This is slightly less than we had last year at that point, but it wasn’t a bad number to have,” Samuel Lioi, pledge chair of the Ambassador program said. Ultimately, those running the program expect to hit the usual number of 20 fully-accepted Ambassadors.

Dana McMillin is one of two liaisons to the Ambassadors in the Admissions Office. She and Andrea Grady work closely with the students and oversee the Pledge Process.

Although the committee does not have a set number of new Ambassadors, it is normally around 20 each year.

What sets the Ambassadors apart from other clubs on campus is that they are essentially paid employees, as well as a critical component to the recruitment process of prospective students,” Mcmillin said.

“Without the Ambassadors as a part of our recruitment team, the Admissions Office could not expose prospective students and their families to Mercyhurst’s campus and its culture, especially from a student’s prospective, which I believe is so important,”

After the first meetings, an initial interview day took place to help current Ambassadors get to know the students, known as pledges, and see their potential strengths and weaknesses. After these interviews, the first cut was made.

“Even though we had slightly less [pledges] to begin with, after this first cut, we cut down to about 48; which is the same number we had after the first cut last year,” Lioi said.
On Sunday, Oct. 25, the pledges took their written test. More cuts took place after that.

Mary Catherine Nemecek, senior Hospitality Management major, has been mentoring for the pledges for the past two years.

“I think the actual first cut came after the written test, because they evaluate your interview, how you are interacting with your peers and pledges committee and obviously how you did on the test,” Nemecek said.

Not all of the 48 students went to the written test. Speaking about why some students dropped out, Lioi and Nemecek agreed on the reason: It is simply a rigorous program.

“It’s a little intimidating, to be honest, having to go to the meeting, dressing appropriately and learning about the entire school, especially for those freshmen who barely know about the school. So a lot of the dropout rate deals with those reasons,” Nemecek said.

Lioi claims that given the rigorous nature of the test, not everyone will do well, every year some pledges drop off throughout the process.

“It is tough and it is a large time commitment that isn’t always easy to balance with all of the other busy aspects that come with being a student. Plus, some people begin to go through the process and they realize being an Ambassador just might not be something they want to be,” Lioi said.

“Our pledge committee, which includes Katie Kaminski, Amanda Beardi, Becky Schratz, myself and also our president, Meaghan Hubert, who oversees the process, are all very impressed with our current pledges. In the end it’s all about quality not quantity, and so far we have seen no problems with quality.”

Nemecek, however, thinks the smaller number of pledges might affect the quality of the overall program.

“I think [some pledges], just see it now like a way to put it on their resumes. But I also see the students who do well and do want to succeed in Ambassadors. I wish we had more,” Nemecek said.

In order to get students interested in the Ambassador community, both current ambassadors think they need more advertisement.

“There is something missing and I believe it’s advertising and maybe explain more for the kids about what it is might help,” Nemecek said.
Additionally, Nemecek believes that getting students to see the value of the club can help to increase the pledge number in future years. She hopes other students will adopt the same passion she has for the program.

“Particularly when I was a freshman, learning about the history made me love the campus so much more,” Nemecek said.

“I love where I am. I will remember this for the rest of my life and I have so much respect for my school.”