Judge Ernest J. DiSantis Jr. sentenced Teri Rhodes to a minimum of three years and four months in state prison stemming from a voluntary manslaughter charge in the Aug. 12, 2007, smothering of her newborn daughter.

Rhodes, 22, had previously been given nine to 18 years for voluntary manslaughter in a November 2008 ruling by Judge William R. Cunningham. A Pennsylvania Superior Court overturned that sentence in 2009, citing a belief that Cunningham had acted impartially in sentencing Rhodes for a duration she had not agreed to in a plea bargain.

The investigation, the controversial charge of voluntary manslaughter (a crime committed after provocation from the individual killed—in this case, a newborn baby), and Cunningham’s initial sentence divided the Erie and Mercyhurst communities. Some believed his punishment too severe, others thought it not stiff enough.

“I think his decision was fair for this crime,” said Rhodes’ lawyer, Philip Friedman, after the 9 a.m. sentencing. “We would have liked a lesser sentence, but we can’t complain.”

Sports information photo: Rhodes spent the 2006 season as a freshman on Mercyhurst’s volleyball team.Rhodes, then an 18-year-old sophomore, delivered the baby alone in a college apartment bathtub at 3810 Briggs Ave. Police found the child’s body hours later wrapped in a plastic bag.

She had not told anyone—family, friends, teammates or roommate Julia Butler—that she was expecting. Butler returned from volleyball practice that Sunday afternoon, later telling police she heard Rhodes in the bathroom making noises to suggest she was in pain.

Butler contacted former volleyball assistant coach Sarah King, who took Rhodes to the hospital after the birth while investigation into the infant’s death began.

Merciad file photo: Rhodes shared a 3810 Briggs Ave. apartment with a teammate during the beginning of the 2007-08 school year.

“I just want to tell you how sorry I am,” Rhodes said as she stood before DiSantis on Friday. “If I could change anything from that day, I would… I will try, every day for the rest of my life, to atone for that day.”

Following her release from Erie County Prison on $25,000 bond in February 2009, she returned home to Commerce, Mich., and enrolled at Oakland University.

She had been expected to graduate with a degree in computer science in spring of 2012.

“There’s no question she’s a good kid,” Friedman told DiSantis during the proceedings. He had sought a reduced sentence without time served in a correctional facility.

“She’s not the type of person who belongs in prison,” he said. 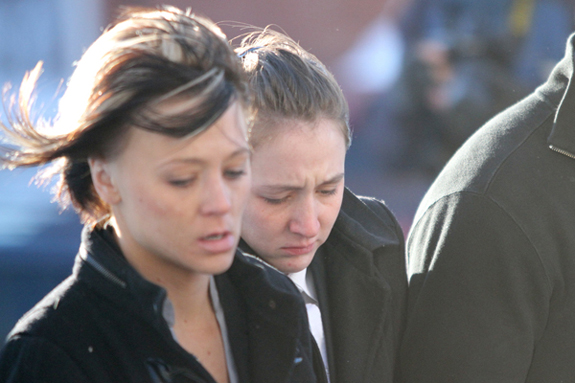 Photo by Ethan Magoc: Teri Rhodes, center, and her sister, Elizabeth, left, walk into the Erie County Courthouse on Friday, Feb. 4, 2011, for a re-sentencing before Judge Ernest DiSantis.
Both DiSantis and Erie County District Attorney Jack Daneri acknowledged Rhodes’ positive behavior since the incident, her clean record prior to August 2007 and her remorse for the crime.

Still, they each asserted that her conduct must be punished. Daneri said he has received some 60 letters from those close to Rhodes vouching for her character. Of those, he said only three mentioned the child’s life.

“The Commonwealth is here to provide a vision of that little girl…(who) would be about this high,” he said as he held his hand a few feet off the ground.

“That’s what we’re here for,” Daneri said. “It is my duty to bring a case against (Rhodes) without malice.”

Rhodes, who—along with her assembled family—sobbed throughout the proceedings, then became openly distraught and was provided a chair by court officers.

She will be credited with three months served from November 2008 to February 2009. DiSantis also recommended Rhodes continue to receive psychiatric aid and pursue educational opportunities during her prison sentence.

Toward the end of his dialogue, DiSantis acknowledged he was about to sentence Rhodes for the wrong charge.

“This is not a case of voluntary manslaughter,” he said. “I wanted to say this case fit into a peg. It didn’t.”

Instead, he argued, Rhodes’ case was broader and should bring about a discussion of how this country views and deals with teenage pregnancy.

“Society has to provide support and counseling to young people,” he said, “so they don’t have to wrestle with this all alone.”