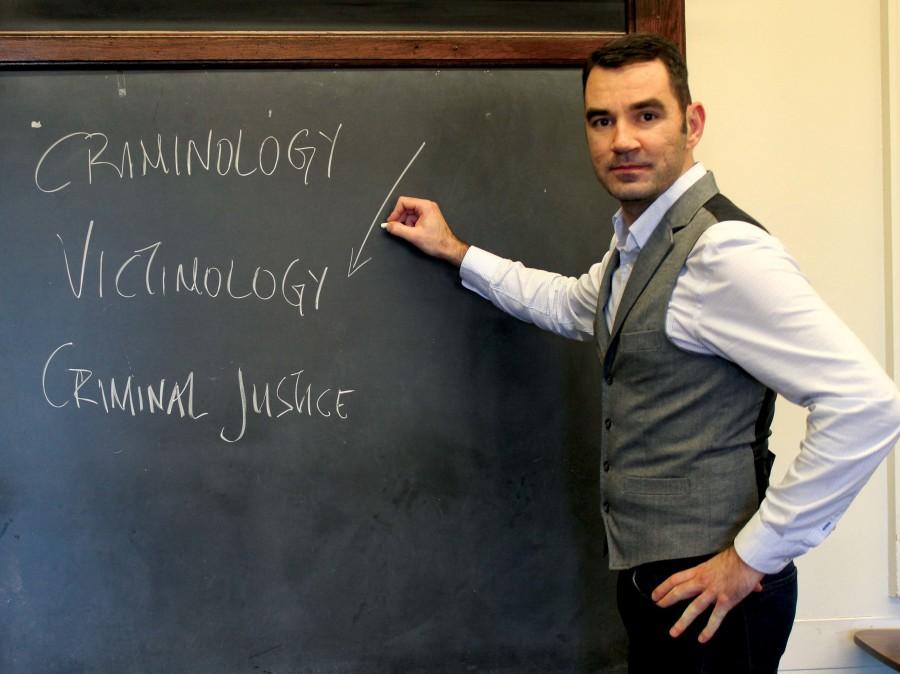 Spyridon Kodellas retired as a journalist to pursue a Ph.D. in Criminal Justice. He is now the Assistant Professor of Criminal Justice at Mercyhurst and is happy with his new life in Erie.

Originally from Greece, Spyridon Kodellas, Ph.D., is the newest addition to the Criminal Justice Department.

Kodellas received his B.A. and M.A. degrees from the National and Kapodistrian University of Athens and worked as a professional journalist for almost a decade. He has interviewed Nobel Prize recipients, such as Louis Ignarro and Peter Agre, famous U.S. court judges, such as Richard Posner, and college professors, such as Albert Bandura and Athanassios Fokas.

“Working for newspapers and magazines can be a lot of fun. However, I never felt I was making a difference working as a journalist” Kodellas said.

So, at the age of 26 he decided to pursue a research degree in Criminology and Criminal Justice. He was awarded a prestigious Fulbright Scholarship and moved to the School of Criminal Justice at the University of Cincinnati to work with prominent criminologists such as Bonnie Fisher, Francis Cullen and Pamela Wilcox.

In 2012, he graduated with a Ph.D. in Criminal Justice and he was awarded the Garvin Distinguished Dissertation Award for his work on the relative importance of situational and dispositional factors in predicting victimization, perceived risk and fear of crime at the workplace.

Subsequently, he went back to Greece and spent two years as an Assistant Professor and Senior Research Associate at the National and Kapodistrian University of Athens. Before coming Mercyhurst, Kodellas spent a year teaching Criminology and Criminal Justice courses at the University of South Florida, Sarasota-Manatee.

“Guiding students through the principles and practices of social scientific inquiry in Criminology and Criminal Justice and doing research on how to prevent crime and victimization are the most important and stimulating aspects of my academic career,” Kodellas said.

In 2013, Kodellas was awarded with the Garvin Distinguished Dissertation Award.

Between 2014 and 2015, he was a Visiting Instructor of Criminology at the University of South Florida Sarasota-Manatee. In September of 2015, he began a tenure-track appointment as an Assistant Professor of Criminal Justice at Mercyhurst.

Kodellas is recently married to Yujia Wang, an economist, and splits his time between Erie, Pa and Avon Lake, Ohio.

“I’ve made my home here with my wife, and we are happy to start our family,” Kodellas said.