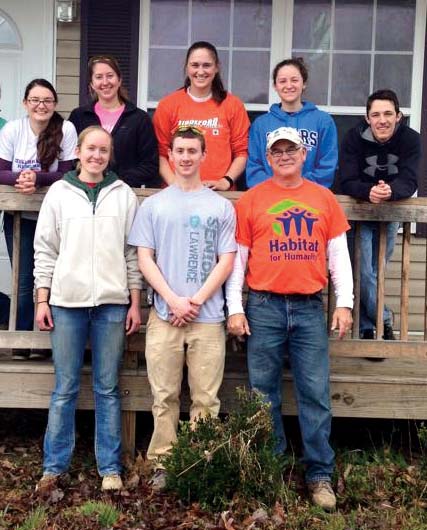 By building homes and character, Habitat for Humanity Club is creating better lives for the citizens of Erie.

Under the wing of Campus Ministry, Habitat for Humanity does various works within the community. Next weekend, Saturday, Nov. 7, the club is going to their local site in Erie with 12 students to continue construction on a house. They plan to return before Christmas and the house is expected to be completed by the end of this year.

Habitat for Humanity is an international Christian non-profit organization with over 1,400 local affiliates, including one in Erie. According to their website these affiliates  are formed by concerned citizens who wish to help address the issues of poverty within their community.

In Erie County, Habitat for Humanity is not in short supply of potential projects.  In an early 2015 study by the Erie County Department of Human Services, the unsheltered number of homeless is approximately 1,500 with an additional number of people in shelters.  In a different study by United Way, 17 percent of Erie County residents live below the poverty line and within city limits, the number increases to 30 percent.  These statistics help fuel the work of Habitat for Humanity.  They hope to create low cost housing to help people out of the poverty line.

In addition to doing work in the community, all Habitat for Humanity affiliates are required to give a certain percentage of their contributions to affiliates from across the globe.  The goal is to end poverty at home and abroad.

The Habitat for Humanity club at Mercyhurst does more than just work in Erie.  Over spring break 2016, the club is sending 20 students to Monroe, NC, and 20 more to Port Huron, MI.  This trip will consume all of the selected student’s breaks, but Hewitt believes it is noble sacrifice.

“Knowing that you’re building a home for this person’s children to grow up in is so rewarding,” said Hewitt.

For more information on trips or projects with Habitat for Humanity, email Kelsey Davies at kdavie69@mercyhurst.lakers.edu or Jeremy Hewitt at jhewitt@mercyhurst.edu.
Students selected to go on these trips are done so on a first come, first serve basis.