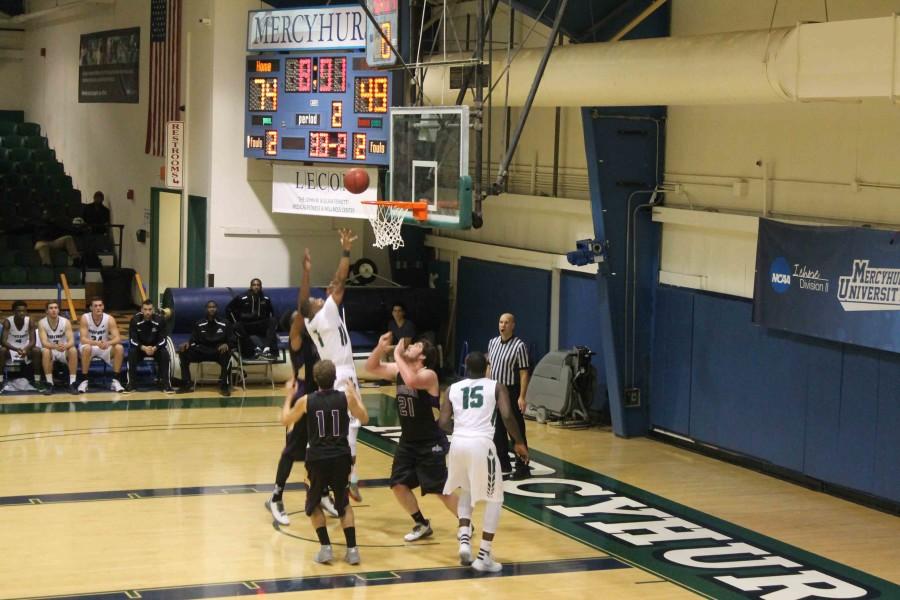 The Mercyhurst men’s basketball team had waited all summer for this moment, and after an impressive season last year, they were able to open this season on a high note.

Senior Damon Jones led all scorers with 22 points, and the Lakers opened the game on a 9-2 run and never looked back en-route to an 88-58 victory over Division III Houghton College last Friday, Nov. 13, at the Mercyhurst Athletic Center. This is the first time since 2010-11 Head Coach Gary Manchel’s team won its first game, providing a solid warm-up for Wednesday, Nov. 18, conference opener against Indiana University of Pennsylvania.

“We executed today, got the job done,” said Jones. “Coach [Manchel] really harped on defense, and we got the stops that we needed, and we just executed when we needed to.”

The Lakers controlled the entire contest, leading wire-to-wire and by as much as 35 in the second half. They scored the first seven points in a span of just over two minutes, including five from Jones. They later went on runs of 11-4 in only 2:44 and strung together two separate 13-point spurts in the second half, each in just over four minutes.

Senior Jean Onana had eight points off the bench, including a long three on 4:50 to extend the lead to eight. Jones then stole a pass and made two free throws to cap the run and the Lakers had a 12-point lead by the second media timeout.

“It feels good basically, the plays that Coach drew up were working,” said Jones. “He’s a great coach, he’s real good with X’s and O’s, so it was good to just go out and execute.”

This execution led to a total of 38 made field goals, including 6-17 from beyond the arc and several runs to open up a permanent double-digit lead just 7½ minutes in.

Senior Sean Beins had 13 points and two blocks off the bench, which outscored the Highlander’s 36-24, and went 6-8 from the floor. The Lakers acquired less rebounds, 38-26, but out-assisted Houghton 19-9 and forced 23 turnovers and 14 steals, including eight from the starters and three from Jones.

The second half was more of the same, with the teams producing the exact same scoreline as the first (44-29).

Again, the Lakers did most of their damage in runs, scoring 19 straight points in a span of just 5:22 to open up a 33-point lead on 27 minutes.

Redshirt senior Gerrae Williams only made one bucket in the second half and a three during the early run, but contributed 13 points on a combined 5-9 from the floor and chipped in three rebounds and two steals.

The Highlanders were able to slightly trim the deficit during each half, but never got closer than 27 after the run finished up.

For the Highlanders, Phil Pellegrino led the way with 14 in 25 minutes on 5-13 from the floor, Johnathan Stowe had six and six rebounds, and Dylan Lambert had 8 and five boards off the bench. Mercyhurst will start PSAC Conference games with their next match against Indiana on Wednesday, Nov. 18, in the MAC at 7:30 p.m.

The team continues their stretch of home games into the weekend playing Friday, Nov. 21, against Shippensburg and Saturday, Nov. 22, against Kutztown, both at 3 p.m.