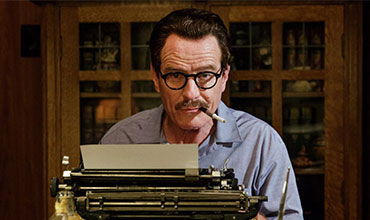 Pictured above is Bryan Cranston as the main character Trumbo from the film “Trumbo”.

Throughout history, we have seen people who have stood up for their beliefs and refused to back down.
“Trumbo” is an exemplary film of a man, Trumbo, who worked as a screenwriter for Hollywood. When he is questioned before the Supreme Court about Communist propaganda in recent films, Trumbo and a few others refuse to say anything. They are all put in jail for refusing to cooperate.
After being released from jail several years later, Trumbo is broke, blacklisted and struggling to keep his family together. He cannot find work since he is blacklisted, so he goes to work as a low budget screenwriter. Trumbo receives help by getting his family involved in running the place, and he hires other blacklisted writers to help him.
After writing several low key screenplays, one of Trumbo’s later works received two Academy Awards, but he cannot claim them because Trumbo cannot let anyone know who is writing the films.
As the rest of the film world becomes outraged by the exposing screenplays, and try to figure out who is creating them, several other screenplay writers try to expose Trumbo, but fail, especially after President Kennedy praises one of Trumbo’s films.
“Trumbo”, directed by Jay Roach, details the struggles and hardships that Trumbo had gone through amidst all of his secrets in his era.
It also recounts the secret society that he was a part of that banded together to expose the wrongdoings that surrounded the Hollywood blacklist.
Furthermore, it details his unique use of words and intricate writing as he tries to evade the public eye in order for his works to not be discredited.
If the intriguing tale of a man fighting for his beliefs, and the tragic era of lies and deceitfulness of Hollywood films sounds exciting, then come join us on Sunday, Jan. 24, at 2 p.m. in the Taylor Little Theatre.