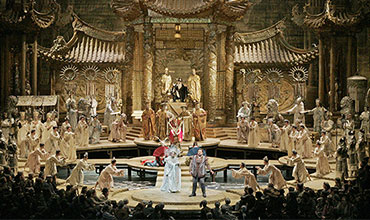 A screenshot taken from the Met Live in HD: Turandot, by Puccini that will be played in the PAC.

The beloved Met Live performances will return to Mercyhurst at the end of the month of January, starting with a live HD production of “Turandot” by composer Giacomo Puccini.
“Turandot” made its world premiere in Milan, Italy, at the Teatro alla Scala in April of 1926. It is easy to recognize the opera, with its unusual score and innovative choral and orchestral use, as a work of Puccini. Although, it was unfortunate that the final scene had to be completed by composer Franco Alfano when Puccini died suddenly. Conductor Arturo Toscanini oversaw Alfano’s contribution and led the world premiere.
Turandot is an epic fairy tale set in a China of legend, loosely based on a play by 18-century Italian dramatist Carlo Gozzi. In true fairy-tale fashion, the opera features a prince seeking the hand of a princess; however, any prince wishing to marry the Princess Turandot must answer three riddles.
If the princes fail, they must die at the order of the princess; this is how she exacts revenge on men as a result of the anger she has towards a prince who once abducted and killed one of her female ancestors.
Her beauty at the execution of her most recent failed suitor shocks a man in the crowd who then promises he will win her hand.
Christine Goerke, Lise Lindstrom and Nina Stemme, three of opera’s greatest dramatic sopranos, take turns in the title role of the proud princess of ancient China. Tenors Marcelo Álvarez and Marco Berti are Calàf, the brave prince who sings “Nessun dorma” and wins her love. Franco Zeffirelli’s golden production is conducted by Paolo Carignani.
The Met Live in HD production will take place in Performing Arts Center on Saturday, Jan. 30, at 1 p.m.
Tickets are $18 for adults, $15 for seniors/students, $10 for children (12 and younger) and $7.50 for Mercyhurst students with ID. For tickets, call 814-824-3000 or visit miac.mercyhurst.edu.