Ratner plays Mercyhurst basketball for a higher cause 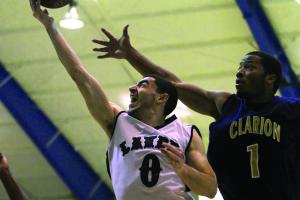 In two years at JMU, Ratner, a Las Vegas native, scored an average of 3.8 points per game and played in all but three contests in his two-year stay. During his first year as a Laker, Ratner led the team in scoring, averaging 13.3 points per game.

As a senior, Ratner, who has already grabbed a PSAC West player of the week honor, leads the league in scoring with 21.9 points per game, and has started and played all 18 games this season.

Ratner first drew the attention of head coach Gary Manchel with his ability to score. While recruiting Ratner, Manchel thought he was a good fit for the system and “loved him from the beginning.”

Ratner has a true passion for the game and a will to make an impact on the court.

Manchel and his recruiting persistence played a big role in drawing him to Mercyhurst. According to Manchel, Ratner’s best quality on the court is scoring. Manchel noted that he is one of four main players the team looks at to kick-start its offense.

Ratner agrees that the best thing he does is score, as he has already tallied nearly 400 points this season.

Ratner is not just one of the first guys looking to score but also possesses strong character. He is one of the first to run across the court to help a player, regardless of the name on the front of his jersey.

Manchel said Ratner’s selfless nature and desire to make people around him happy is one of the most impressive things about this senior standout.

One of the goals the team has and his teammates have set for this season is to make college history by getting to the NCAA tournament for the first time. Although Ratner likes to win he says his favorite part about playing basketball is that it is fun.

“The game is fun, it has always been and it’s a gift from the Lord,” Ratner said, “I enjoy playing for His glory.”

Manchel said Ratner’s best off-court quality is his spirituality and his desire to always do the right thing. This quality is the same thing that not only motivates and inspires Ratner, but also makes him the player that he is.

“I want to represent Jesus with my play. And giving it all I have for Him is what shapes the player I am today,” Ratner said, “His love and grace given when we don’t deserve it inspires me more than anything.”

This season Ratner has set a personal goal to give everything he has for his last season of collegiate basketball and plans to leave nothing back.

“This season, he’s more mature on the court and knows his expectations,” Manchel said, “The sky is the limit for this kid.”

Ratner is a religious studies major with a focus in youth ministry. After graduation, he plans to look at the possibility of playing professional basketball internationally. He also has plans to begin a church in Las Vegas.