The very hungry caterpillar will be here 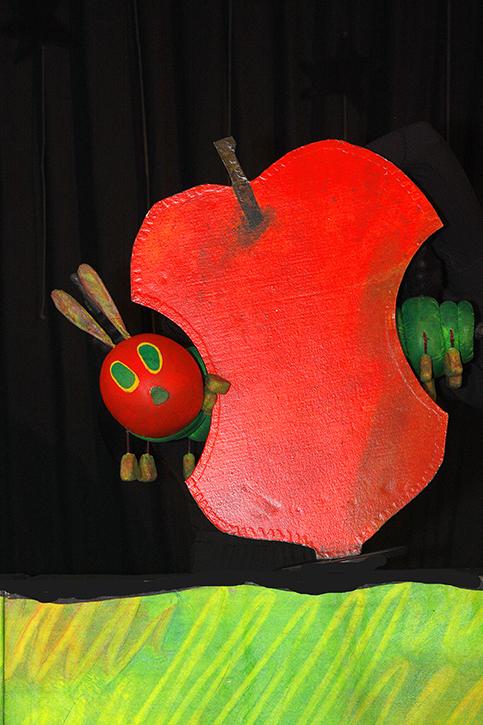 The very hungry caterpillar puppet in action as he eats a variety of foods before he becomes a beautiful butterfly.

The next performing arts show in the MIAC 2015-16 season brings in The Mermaid Theatre of Nova Scotia and their presentation of The Very Hungry Caterpillar and Other Eric Carle Favorites.
According to their website, the Mermaid Theatre of Nova Scotia was founded in 1972 and have performed in front of over 5 million people in 16 different countries. The Very Hungry Caterpillar production is celebrating its 17th year of touring. The show has been performed more than 3,300 times.
The show will feature three of Carle’s works including “The Very Hungry Caterpillar”, “Little Cloud” and “The Mixed Up Chameleon.” This show is one that has earned the Mermaid Theatre international acclaim and recognition.
“The Very Hungry Caterpillar”, a staple in any elementary school library, is a cherished children’s book about a caterpillar who eats an interesting selection of foods until he becomes a beautiful butterfly.
“The Mixed Up Chameleon”, another popular Carle work features a chameleon who, after visiting a zoo, tries to imitate some of the colors of other animals because he is displeased with his own look. After trying all of the different colors, the chameleon realizes that everyone, including himself, is special just the way they are.
“Little Cloud” is about a cloud that transforms himself into various shapes including animals and people.
The production is put on through puppets lit up by black light so only the puppets are shown as they act to a narration of the books. The show will last approximately one hour.
Their show times are Saturday, Feb. 13, at 11 a.m. at 4 p.m. in Walker Recital Hall. Student Rush tickets are available on the day of the show for $5 with a student ID.