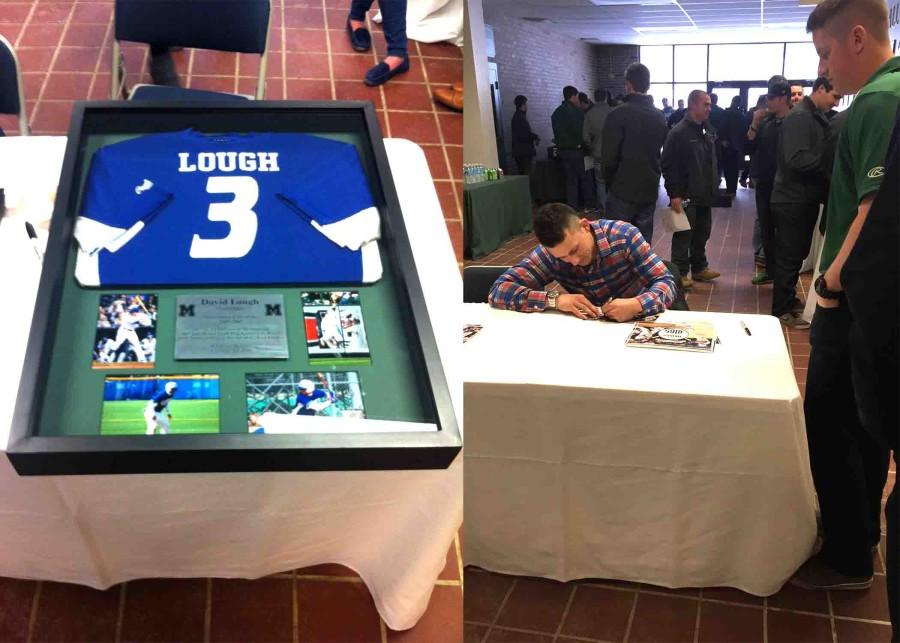 (Left) Lough’s retired jersey on display with a plaque and pictures from his Mercyhurst baseball career. (Right) Lough signs an autograph for Matt Swartz during a meet-and-greet.

Former Mercyhurst baseball and football player David Lough was honored for his achievements during a jersey ceremony on Saturday, Feb. 13.

On display in a showcase was his Mercyhurst baseball jersey, a plaque and pictures from his baseball career at Mercyhurst. Pictures from his football career were also on display. During halftime of the men’s basketball game, the showcase was brought to center court and Lough’s accolades from his playing time at Mercyhurst and in the Major Leagues were announced before he went onto the court to greet head baseball coach Joe Spano, head football coach Marty Schaetzle and Athletic Director Joe Kimball. This marked the retirement of his baseball jersey.

Lough was available for a meet-and-great and autograph session before and after the ceremony. He signed autographs on a poster with the catchy slogan, “From Briggs to the Bigs” referencing the Mercyhurst campus housing.

Lough played baseball and football for three years at Mercyhurst before getting drafted by the Kansas City Royals in 2007 Major League Baseball Draft during the 11th round. At the time, this was the highest draft in Mercyhurst baseball history. Lough played in the outfield position for two seasons with the Royals and two seasons with the Baltimore Orioles. Starting this 2016 MLB season, he will play outfield for the Philadelphia Phillies baseball organization.