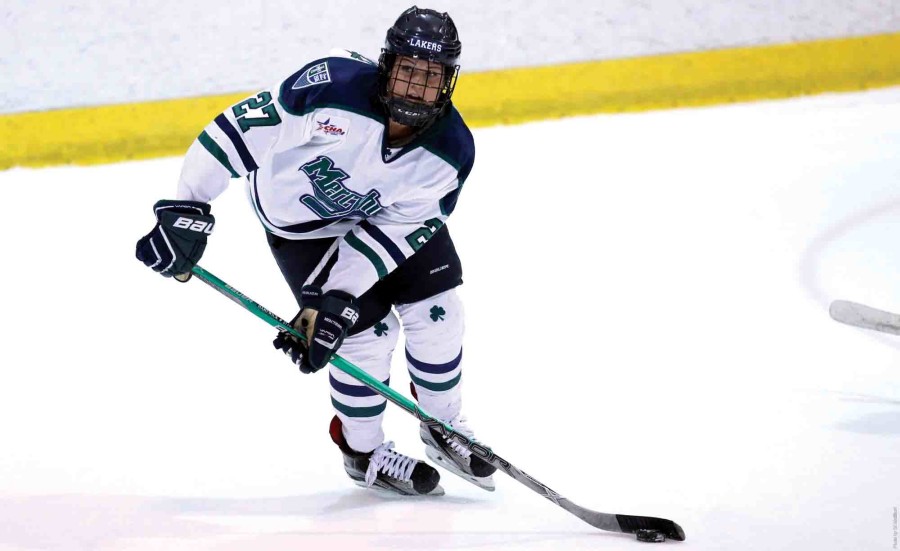 Sophomore forward Brooke Hartwick (above) recorded a goal in each of the Lakers’ games this weekend against RIT.

“I believe we had a great weekend,” said freshman Rachel Smith. “We out-worked RIT, beating them to pucks and were able to capitalize on our chances on our odd-man rushes.”

Late in the first period, sophomore Brooke Hartwick gave the Lakers a 1-0 lead and the Lakers never looked back. Hartwick’s goal was assisted by junior Megan Whiddon and senior J’nai Mahadeo.

During the second period, senior Jaclyn Arbour found the back of the net to extend the Lakers lead to 2-0. Seniors Kathy Donohue and Hannah Bale assisted Arbour’s goal.

RIT beat Mercyhurst freshman Sarah McDonnell at 18:00 in the second period to reduce the Lakers lead to 2-1.

Smith and senior Jenna Dingeldein both recorded goals in the third period to give the Lakers their 4-1 win over RIT.

Senior Emily Janiga and sophomore Jennifer Macaskill picked up the assists on Smith’s goal and Smith and Janiga recorded the assists on Dingeldein’s goal.

“I think just focusing on our own game is important,” said Dingeldein. “Every team is going to be a good team and if we play our game we should be successful.”

The Lakers outshot RIT, 25-20, and Mcdonnell made 19 saves between the pipes.

“This weekend we learned that the game can be changed at any time,” said Smith. “We have to think defense first, and when we get the puck we got to capitalize.”

Mcdonnell saved 11 shots to record her fourth shutout of the season.

Much like game one, Hartwick got the Lakers on the board first with a goal at 2:18 in the second period. Sophomore Sarah Robello and Whiddon picked up the assists on Hartwick’s game winning goal.

Late in the third period senior Lauren Kilroy and Smith assisted, Janiga who beat RIT’s goaltender to give the Lakers their 2-0 win.

“They are going to come out harder than we have ever seen them,” said Smith. “We have to stay consistent for all three periods and not be lazy.”