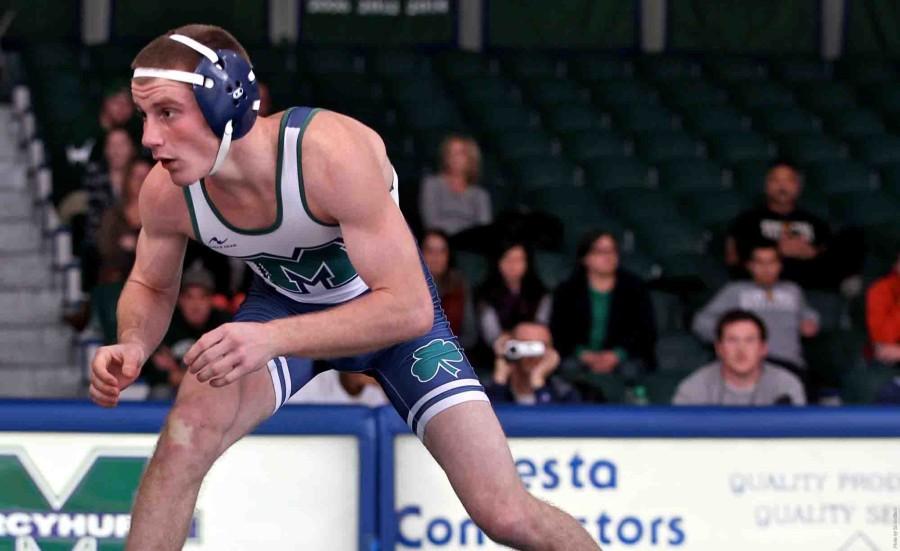 The Mercyhurst wrestling team fell to the University of Pittsburgh-Johnstown on Saturday, Feb. 13.

The UPJ Mountain Cats won the meet, 24-12. The Lakers had a lead of 9-7 going into the second half of the match, but the Mountain Cats, ranked third in the nation, rattled off five wins to overtake the seventh-ranked Lakers, securing the Pennsylvania State Athletic Conference title. Mercyhurst went into the match ranked third in the region with a fourth straight league title on the line. Ranked second in the region, redshirt junior Willie Bohince opened things up with an overtime win to give Mercyhurst an early 3-0 lead. UPJ took the next two matches, taking a 7-3 lead. 149-pound sophomore Joel Bowers went on to pin UPJ’s Travis Shaffer, giving the Lakers a 9-7 lead.

At 157 pounds, freshman Keller Watkins extended the Lakers’ lead to 12-7 with a decision over Mountain Cat junior, Devin Austin.

The Lakers dropped the next five matches with upsets of Mercyhurst’s nationally ranked brothers, Francis and August Mizia. Francis is ranked second in the nation at 165 pounds and August is ranked third at 174 pounds.

Both lost by decision giving the Mountain Cats a 13-12 lead that the Lakers would never retake.

The Lakers head to the Super Region ranked seventh in the nation. Bohince, the Mizia brothers, and 149-pound wrestler Jeremy Landowski go into the tournament with national ranking. All four were All-Americans last season. The 2016 NCAA Super Region One tournament will be held at the Mercyhurst Athletic Center on Friday, Feb. 26, and Saturday Feb. 27.