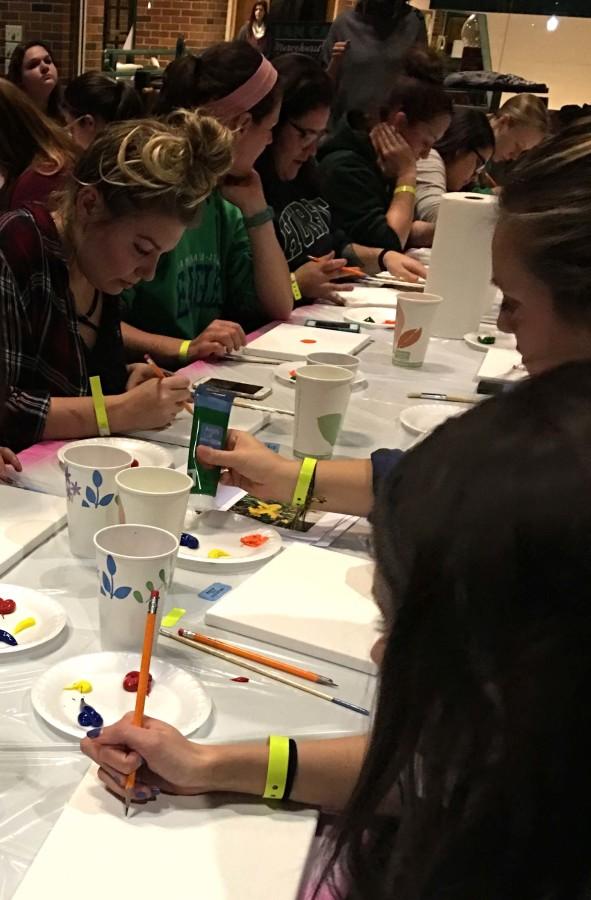 During senior week, every day of the week contained activities that allowed students to have fun, while at the same time allowing them to donate money for the senior gift.

Senior Week kicked off the 100-day countdown until graduation and there was an event every day of the week for Mercyhurst seniors.

On Monday, Feb. 8, senior week commenced with the “Kick Off Party,” hosted in the Student Union. Students were able to pick up or purchase the “Straight Outta Mercyhurst” t-shirts for $20.16, between 6-8 p.m. All the money acquired from the t-shirts went toward supporting the 2016 senior class gift of a decorative anchor.

On Tuesday night, the “Senior Date Auction” took place in the Walker Recital Hall. Various seniors were auctioned off with bids starting at $5 each. The auctioned seniors came along with a donated gift card to be used on their dates with whomever had “bought” them.

“The total for the night was over $900 which included the $3 admission per person. A total of 14 people were auctioned, including a group date with President Michael Victor and another group date with Rhonda from Egan,” said senior Ambassador, Mary-Catherine Nemecek.

On Wednesday, the Cornerstone Bar & Grill joined the celebration by serving $2 shots from 10-12 p.m. Students over 21 were encouraged to party, while donating their saved money for the senior class gift.

Paint Night took place Thursday in the Student Union, an event hosted for seniors who were over 21 years old. Students were allowed to create paintings with their fellow friends and classmates and received two alcoholic beverages in the process. Eighty students attended, who had the option of painting whatever they wanted. Students were able to choose from their phones or from pictures provided that included a Mercyhurst theme.

“It was a lot of fun. I wish the painting canvases had outlines on them so the paintings were more guided. But, it was nice because they had a lot of color options,” said senior Communication major, Alison Hosko.

The “Stone” ended the celebration week on Friday with specials to seniors who purchased the “Straight Outta Mercyhurst” shirts. Students who bought the shirts were eligible to go into the basement to party from 9-12 p.m. Aside from having the basement available, those who wore the shirt also received specials.

“Even though it was a steep price for the shirts, it was well worth it in the end. It was a fun night and I wouldn’t want to spend my last 100 days of college with any other group of people,” said senior Graphic Design major Sydney Vaccaro.

Students who would like to participate in making a donation to the senior class gift should contact any of the senior gift committee officers or email Director of Alumni Engagement, Lindsay Cox at lcox@mercyhurst.edu