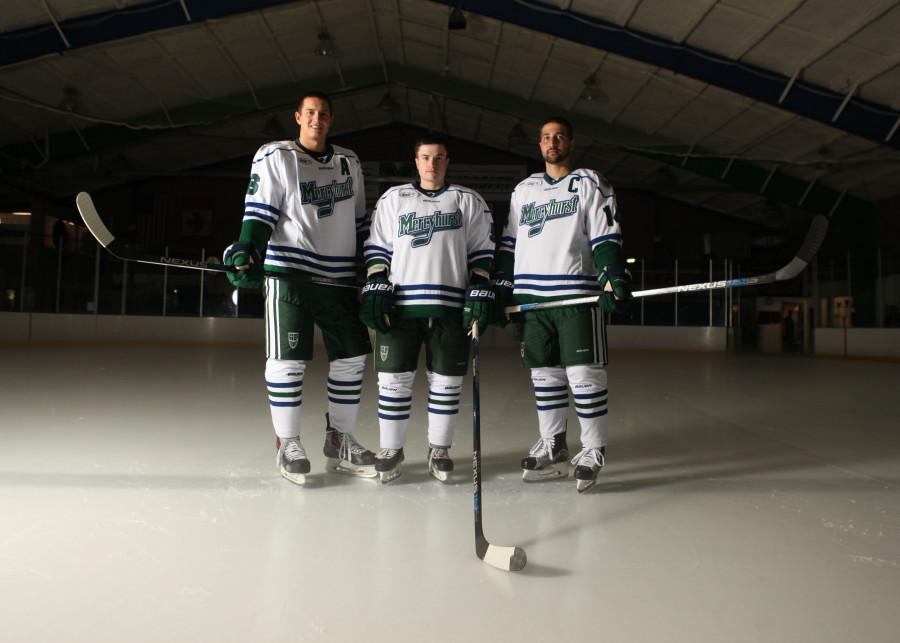 The Mercyhurst men’s hockey team welcomes the RIT Tigers into the Mercyhurst Ice Center on Saturday, Feb. 27, for senior night.
This year, four seniors will be recognized for their hard work and dedication to the Mercyhurst hockey program. Those four seniors are Anthony Mastrodicasa, Kyle Cook, Mychal Monteith and Spencer Bacon.
Mastrodicasa is a defender from Woodbridge, Ontario who is serving as the team’s captain during the 2015-16 season. During his four years at Mercyhurst, he recorded 11 goals and 55 points.
During his freshman year, Mastrodicasa led the Laker rookies in scoring with five points. During his sophomore year he had a career high of three assists against American International College and during his junior year he recorded two 3-point games.
“I chose Mercyhurst for the good hockey program and I was excited to be a part of it,” said Mastrodicasa. “I hope the best for this program throughout the future.”
Cook is a forward from Middleburg Heights, Ohio, who is serving as one of the three alternate captains during the 2015-16 season. He recorded 21 goals and 48 points during his four years as a Laker.
During his freshman year, Cook tallied the game winning goal against Clarkson and was named AHA Rookie of the Week. During his sophomore year, he scored two goals during the AHA Quarterfinals against Holy Cross, including the overtime game winner. During his junior year he had two 3-point games.
“With a younger team I hope that I can be someone that they know they can come and talk to because they are the future of the program,” said Cook.
Monteith is a defender from Toledo, Ohio, who has one goal and 15 points during his Laker career.
During his sophomore year, Monteith ranked fourth on the team for blocked shots with 52. During his junior year he recorded his first collegiate goal against American International College, which was also the game winning goal.
“Hockey has had its ups and downs the past four years but I’ve made some really good friends,” said Monteith. “I hope they know that they can come to me with anything, because I’ve been through pretty much everything here.”
Bacon is a goaltender from Victoria, B.C. who appeared in 10 games, three of which were starts. He has a 2-1-1 record in his three years at Mercyhurst. He is graduating a year early.
During his sophomore year, Bacon had a .901 save percentage and a 3.33 goals-against average. He stopped 145 shots and had back-to-back 30 plus save games.
“It sounds like there are going to be some good changes coming here and the program is heading in the right direction,” said Bacon. “It will be fun to see where they are five, ten years down the road.”
The team’s next game is against RIT in Rochester, N.Y.