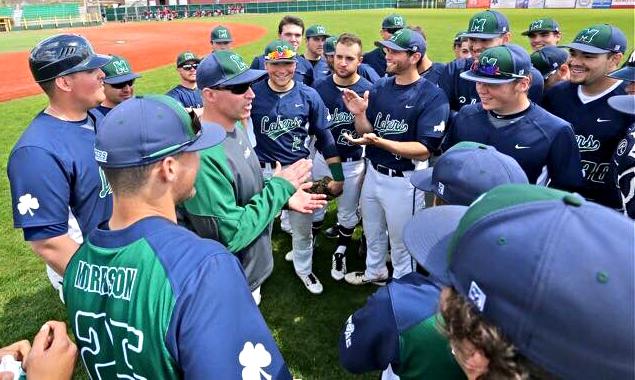 Baseball Head Coach Joe Spano claims his 500th career win in the Lakers 8-1 win over LeMoyne College on Sunday, Feb. 21. Spano has been Head Coach of the baseball team since 2000.

The Mercyhurst baseball head coach Joe Spano reached a significant milestone in his career on Sunday, Feb. 21, in Sutherland, Virginia.
In Spano’s 17th season as Head Coach, he recorded his 500th career win in Mercyhurst’s 8-1 victory over LeMoyne College. Spano is the all-time winningest coach in program history.
“I love my guys, I love my coaches and I love our parents so it was a very special moment,” Spano said.
The Lakers played three games during their weekend series in Virginia starting on Saturday, Feb. 20. The first game against Mansfield University Mercyhurst fell in a close 7-6 game. Then, the Lakers went 1-1 against LeMoyne College, winning their first game, 8-1, before losing 7-4 in the next game.
“After we won the first game Sunday, I was immediately focused on the second game of the double header that we had to play. I really forgot about the significance of the win because it’s just another regular season game,” said Spano. “But all of the players started shaking my hand and hugging me and I saw the parents coming over to the field and they bought a cake for the team and I was very touched.”
Spano has made an impact on the Mercyhurst baseball program since becoming head coach in 2000. He has led the Lakers to a 500-300-3 record in his coaching career. This includes winning the Atlantic Region Championship for the first time in school history and finishing fourth in the country.
Despite the impeccable career Spano is having, he is very humble and wants the team to play to their best ability.
“The fact that they [the baseball players] would even think about that [getting Spano to 500 wins] shows me what type of great people they are, but I really hope they weren’t distracted. I just wanted them to focus on themselves, the team and playing their best. For me, I’m only concerned with getting the team better and focusing on this season. I would take a team achievement over a personal milestone any day,” Spano said.
The baseball team’s conference games start Friday, March 18, with a double header against Seton Hill. Last season Mercyhurst went 2-2 against the Griffins in regular season play and suffered their only loss during the Atlantic Regional Tournament to them.
“The short term goals are to see where everyone fits and we as coaches are learning a lot from the past two trips. We also have some key injuries and we hope to have some great players back soon. The long term goals are to reach our potential and be the best team we can be. I know if we can do that we can be a team that competes in the postseason again,” Spano said.
The Lakers are currently 4-3 with one more series of games during the weekend of March 12 and 13 before PSAC play starts. In the latest NCBWA national poll the team is ranked No. 5.
“I couldn’t be more appreciative of all of the students, friends and family that watch and support us. We have several exciting players to watch, too many to name. We have an offense that if they all are clicking could be very exciting to watch. A good portion of our pitchers are back as well,” Spano said.