The ’Hurst does have talent 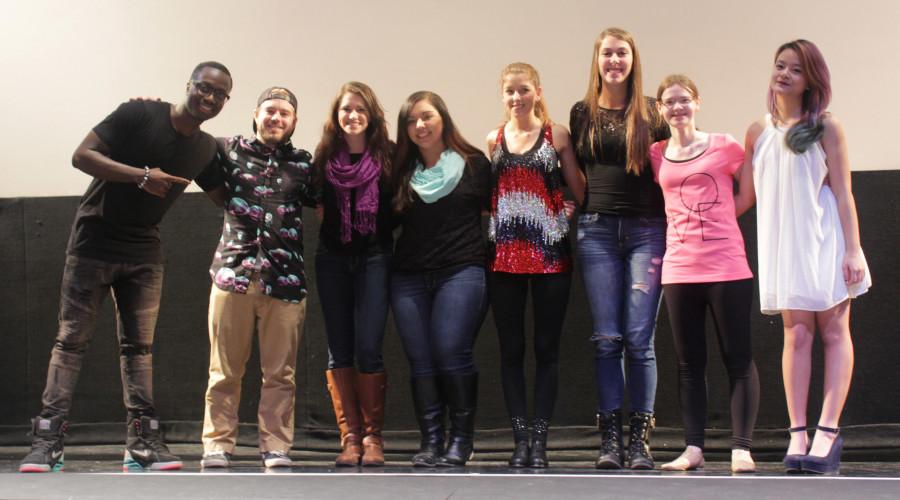 The students that participated in the ’Hurst’s Got Talent event pictured with Kenneth Paryo.

Sophomore Lánnhi Phung won the Hurst’s Got Talent event on Friday, Feb. 19.
Last Tuesday, Feb. 16, she was named one of five confirmed entrants into ’Hurst’s Got Talent, the new annual showcase of student-driven performances.
And just three days later, her stunning rendition of Adele’s “Rolling in the Deep” was enough to win over the audience and garner a two-percent majority of the 180 votes cast through text-balloting in the inaugural contest at the D’Angelo Performing Arts Center.
“It feels great because everyone is so talented and I made friends with them all today,” she said after the show.
The show, hosted by Atlanta-based comedian Kenneth Paryo, going by the stage name Xclusive, is the first talent show-style competition run by the SAC (Student Activities Council).
The previous two years featured “Hurst Idol” a music-based show in the same vein as American Idol.
“We got some feedback from students that they wanted more than just singing, so we decided to go with ‘Hurst’s Got Talent’ so we could have dancers, so like a variety act,” SAC Programmer James Duncan said.
The inclusion of Paryo as host also reduced the number of contestants to just five; as the SAC were projecting a two-hour program, they needed to give Paryo, who had been booked since mid-autumn, enough time to execute his emcee duties.
Duncan also stated that not only did they receive more submissions than expected, the majority of the acts were short in length.
“Out of the auditions, we wanted to get a variety of acts, we didn’t want people doing the same things. We didn’t want multiple singers or dancers, we wanted to give a variety to the students, and we thought that five acts would suffice,” Duncan said.
Auditions were submitted through email to Duncan, Jonah Jackson and Taylor Brookmiller who watched all of the auditions. Leading off the show was sophomore Cathleen Colligan, singing Train’s “Drops of Jupiter” and performing it on piano.
She was followed in turn by Phung in her first American competition, but it wasn’t her first flirt with the talent-show scene.
“I’ve been singing a lot in cafés and that kind of stuff,” she said. Following Phung were the first two dance routines: sophomore Lindsey Lenhardt tapped her way through “Luck Be a Lady,” and freshman Kaitlyn Stark rekindled her jazz roots with a routine to “Mambo #5”.
A three-person team who called themselves Sarah Gravante, Tara and Austin rounded out the evening with an acoustic cover of Imagine Dragons’ “Radioactive” with a combination of pieces from other songs.
Paryo, in his second Mercyhurst performance, used lip-sync routines and anecdotes to serve as a buffer between the acts.
The show-stopping performances wowed the audience several times, incorporating stories of love, romance and simple comedic humor.
The big highlight was a routine using snippets of Michael Jackson songs to augment an anecdote of finding love in obscure places.
With a sequence of dialogue interspersed by four song samples, it had immediately won over the audience.
“Really, I just tried out some new stand-up material, and then usually my storytelling pieces work pretty well, so I just threw a couple of those out there,” Paryo said after the show. “I really just wanted to have fun on the stage.”