At about 4 a.m. on Feb. 13, third floor McAuley Hall residents discovered an inch of water in the hallway and in half of the rooms.

Someone had clogged the sinks with paper towels and left the water running, causing a flood. 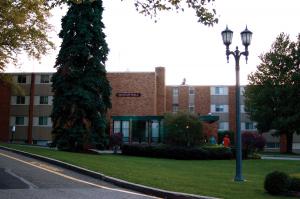 Tyler Stauffer photo: An inch of water flooded the third floor of McAuley Hall. The water was cleaned up 30 hours after the incident occurred.

The water leaked all the way down to Police & Safety on the first floor.

The resident assistant who students notified, sophomore Joe Pudlick, immediately called Police & Safety, as RAs are required to do on weekends, so Police & Safety can then call maintenance.

While waiting for the on-call maintenance person to come clean it up, Pudlick and his residents got out their towels and a mop and started to clean up the worst of it. Pudlick drove to Warde Hall to retrieve a fan so that the floor could dry.

Maintenance didn’t arrive that Sunday morning, saying the weather was too bad to drive in. He said he would be there 4 p.m. later that day, about 12 hours after the flood occurred.

On Sunday at 4 p.m., maintenance deemed that Pudlick and residents had sufficiently cleaned up the water. Maintenance then left the building, Outside Administrator Larry Kerr said.

On Monday at 10 a.m., nearly 30 hours after the flooding, a staff member showed up to shampoo the carpets.

Standard procedure for this kind of incident is for Police & Safety to call the first on-call maintenance person, and if they cannot come, then call the second and the third, and if neither of them can come, call Kerr or Physical Plant Manager Ken Stepherson.

The reason only the first on-call maintenance person was called, Police & Safety said, was because after the source of the flood had been discovered and remedied, the incident was considered taken care of.

The flooding had stopped.

Still, that didn’t help McAuley residents who lived with wet hall and bedroom carpets until Monday.

What further frustrated building residents and RAs was that a similar flooding incident had occurred the previous weekend. Maintenance did not show up at all, even though a clean-up had also been recommended through the RAs and Police & Safety.

Assistant Director of Residence Life Jessica Provenzano, who oversees freshman living areas, could not be reached for comment.