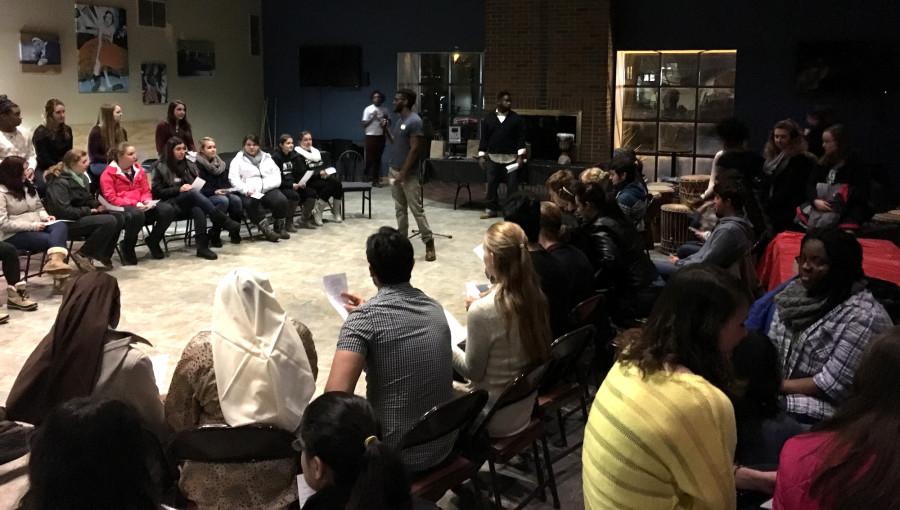 Jonah Jackson took the opportunity to remind students about the importance that African culture plays in modern society.

On Friday, Feb. 26, the Multicultural Activities Council, Student Activities Council and Black Students for Unity collaborated to celebrate the end of Black History Month with the Beautiful People cultural celebration.

Billed as a “celebration of beauty in black arts,” the Student Union was filled with more than 150 students throughout a two-hour program. Not limited to students of African heritage, a diverse selection of attendees represented Mercyhurst’s student body.

Transitioning into the second half, MC and student organizer Jonah Jackson, reminded attendees of the foundation of modern black society.

“Let’s not forget about African American history, which has deep roots in African culture,” Jackson said.

Premier drummer of the Erie African Drum Circle, Lynn Johnson and his fellow musicians performed during the night.  After modest beginnings in a coffee shop, the Drum Circle now performs around the Great Lakes region, making frequent visits to universities in the area. Their appearance at Beautiful People marks the group’s second visit to Mercyhurst.

“I’m so glad to see many young people tonight. It’s real good to see everyone and it’s an encouragement to our future that the young people want to learn new cultures,” Johnson said.

Drum Circle musicians shared their drums with attendees. Students, faculty and even the Sisters of Mercy formed a circle and followed the lead of Johnson, who briefly walked around inciting drum battles with students. For those who were not given drums, space was opened for dancing.

“These rhythms are found in jazz, blues, hip-hop and country,” Johnson said.

Johnson took the opportunity to talk about recent events in politics.

“We have to protect our future and our cultures, we have to be unified, which means we can’t elect leaders like Donald Trump,” Johnson said.

Director of Multicultural Affairs Pertrina Marrero oversaw the details of the event. She believes Johnson’s call for unity echoed the sentiment MAC, SAC and BSU tried to convey throughout the evening.

“It was a success. We really wanted to educate students about different cultures and celebrate the relationship between African traditions and modern African American culture.”

She did not endorse the political remarks of Johnson, but admitted that political movements have been integral to African American culture.

“Freedom of expression is tonight’s theme. Tonight’s purpose is to showcase Mercyhurst’s unity and we did that,” Marrero said.

Students learned more about black culture at themed stations after the drum performance. The stations educated students about the African language of Swahili, stencil artwork, black history trivia and a game station featuring the spades and Mancala were available. Winners of the games were provided with raffle tickets for top prizes, including African American movies, CDs and a drum from the drum circle’s collection.