The mandolin is relevant 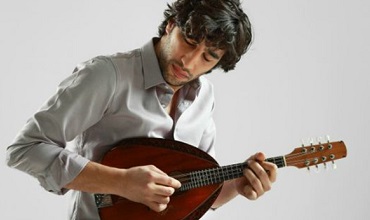 The mandolinist Avi Avital who will perform at Mercyhurst University.

Mercyhurst University welcomes world famous Mandolinist, Avi Avital.
Avital was born in southern Israel. He began playing the mandolin at the age of eight, and was soon involved in an orchestra.
Avital graduated from the Jerusalem School of Music, and then traveled to Italy to learn the history of the instrument.
Avital is internationally known, having played in New York, San Francisco, Beijing, London and Israel along with many other places.
He is the first mandolinist to ever receive a Grammy Nomination for “Best Instrumental Soloist” in 2010.
He has won numerous competitions and awards including Germany’s ECHO Prize for his 2008 recording with the David Orlowsky Trio and the AVIV Competition in 2007, the preeminent national competition for Israeli soloists.
Avi plays many different genres of music including baroque, classical, jazz and traditional Jewish music of Eastern Europe.
All throughout his career, Avi has captivated audiences by passionately playing music in a way that speaks to more than just your ears. For Avital, music is a pathway to another place.
He will be joined onstage by an accordion and percussion for his Between Worlds program.
Avital will perform a cross-cultural concert highlighting his innovative transcriptions of Bach and Bartók and his mastery of classical technique.
Do not miss this opportunity to see Avital in the Walker Recital Hall on Thursday, March 10, at 7:30 p.m.
Tickets are $14 for students.