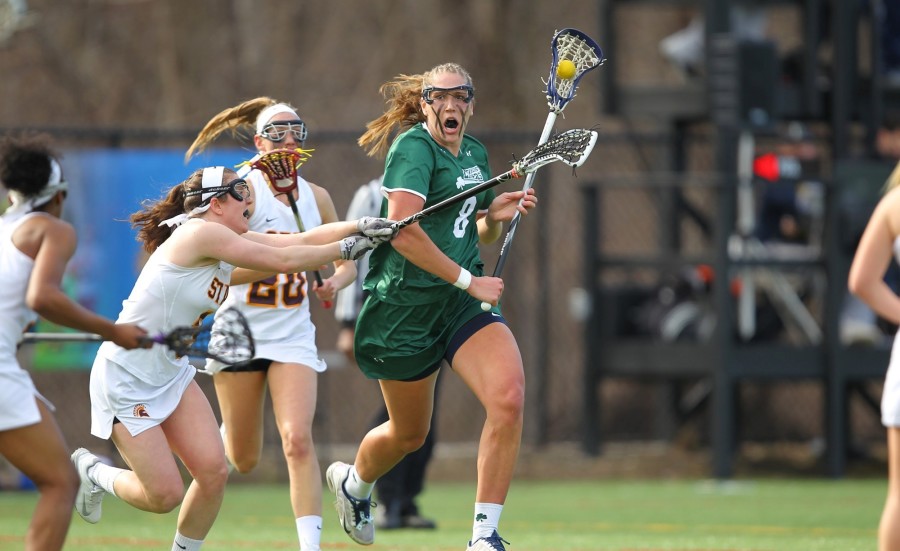 Kristin Anderson (8) is tied for second nationally with 67 draw-controls. She scored five goals against Shippensburg.

Brigid Hurley spent only one season as assistant coach of the Mercyhurst women’s lacrosse team under longtime headman Cecil Pilson.

But after racking up 133 wins and seven consecutive PSAC tournament appearances, Pilson abruptly left his post in December to assume the role at Division I Butler, leaving a huge interrogative as to how Hurley would hold up succeeding him.

But her Lakers are flying high to open her first full campaign as the top dog, going 7-0 in March to open up a 10-1 record

The Lakers have won their past nine games, tying a program record last achieved each year from 2008-10.

Now holding the No. 5 and 4 rankings respectively from the IWLCA and Lacrosse Magazine, the Lakers’ strong attack, now averaging 15.36 goals per game, has them soaring into critical games this week against Roberts Wesleyan and East Stroudsburg.

Senior midfielder and Williamsville North product Emily Koestler attributes it to a positive morale in the locker room, a unique approach for a team now nine games over .500.

“I definitely think that us having positive attitudes on and off the field has helped us to realize that we’re a lot better than people think we are, and that has helped us in many games recently [to] have high-scoring games and work together from defense all the way up to the offense so we have a good fluid game,” Koestler said.

What appears to be working for the Lakers in the first half of this season is a formula that has proved repeatedly to lead to any degree of success. After leading the PSAC with 296 goals and a .517 shot percentage, the Lakers are well on their way to matching it this year, scoring 169 in its first 11 games—a +17 differential compared to the first 11 games in 2015—at an average of 15.36 per game.

Nearly 63 percent of the Lakers’ tallies this season have been unassisted, and 38 of them are on free-position shots, including Koestler’s first two career goals in her senior season. The Lakers are outscoring their opponents by an average of 6.3 goals per game while holding a +70 scoring margin, including 89-41 in the second half.

Over the course of their current nine-game winning streak, including their first seven PSAC contests, the Lakers are averaging 15.6 goals per game and outscoring their opponents by exactly seven per contest.

They are also holding their first seven conference opponents to just 22 second-half goals and 145 shots. The Lakers have held five of their nine opponents in the overall streak to single-digits, and notably allowed then- No.4 West Chester to just 36.4 percent on 8-22 shooting in a game that required two overtimes to decide.

“I think the key is when we win the draw control and when we just flow down the offence either by getting a fast break to net or when we make space for each other by doing double cuts or different play, that’s really helping,” Koestler said.

In their two most recent contests on April 1 and 2, the Lakers held true to form and outscored Millersville 9-4 in the second half en-route to a 16-10 victory.

The Lakers were out cleared for only the second time this season, but outshot the Marauders 34-23, including a 17-8 shot-on-goal advantage in the second half. The Marauders kept it interesting and were only down one at the half.

Two separate 4-0 runs by the Lakers broke the game open, with Kristin Anderson contributing four in the second to raise her season total to a game-high 28.

The following day in Shippensburg, the Lakers found themselves trailing for just the second time since March 19 and failed to score the opening goal for just the third time this season.

They exploded for the first 12 goals of the second half. It was just the second occurrence since February 2010, and included a natural hat-trick by Churchville Chili’s Carly Zimmerman.

Anderson is having a breakout campaign, leading the team and tied for 27th in the nation with 33 goals and 41 points after scoring just ten last season, and is converting 54.1% of her 61 shots.

Directly behind her is Zimmerman, with the two-sport star recording a breakout season as well, her 29 goals and 36 points both second on the team to Anderson. These two have accounted for the first six-goal games by a Laker since April 2014.

Also in that impressive 17-6 win, newcomer Taylor Izzo, a sophomore from Frontier Senior, recorded half of her 12 assists.

Meanwhile, Fairport’s Emily Gebhardt needs just two goals to become the fifth 20-goal scorer for the Lakers this season, and her team-high 16 assists put her third with 34 points, including an impressive seven-point game in the season-opener at St. Thomas Aquinas on Feb. 20.

The other seven in that game belonged to Amherst Central’s Grace Lawson. Now a sophomore, she recorded five of her 25 tallies that day and is one of just three players to find the back of the net in every game this season.

On the other side of the ball, the Lakers are dominant, allowing only .42 goals/game more than the 2015 team.

Webster Schroeder product Kristina Roberti is the anchor of that defense, recording a team-high 37 ground balls, her figure of 3.37 per game tied for 23rd in the country.

Meanwhile, Anderson ranks tied for second nationally with 67 draw-controls and fourth at 6.09 per contest. The Lakers as a team are 16th nationally at a scoring margin of 6.36, and have held an advantage in ground balls in all but three contests.

“Coming from a defensive standpoint, we have a pretty solid defense,” said Koestler. “When we get refs that let us play aggressive like they did in the Le Moyne game, we really are pretty unstoppable,” Koestler said.

What the Lakers also excel at is clearing the ball from their defensive zone, converting 75.8 percent of clears in conference play and a remarkable 78.3 percent on 112-143 overall, tops in the PSAC.

The one area that has been a struggle for the Lakers this season is in between the pipes. Despite her 8-1 record, Gates Chili’s Gabby Gravino has posted an 8.62 goals-against average and stopped only 41.6% of her 190 shots faced, and has yet to record double-digit saves in a single game. Her GAA is still sixth in the PSAC and 24th in Division II, but Koestler attributes it to several factors.

“[It’s] probably due to the reffing and the 8-meters that were getting called against us. When you put [a] girl on the eight, she’s got a lot of chances to score there because there’s no one in front besides the goalie; I think that and some goals were fluke goals recently, and bad communication of defense, but we’re fixing that,” Koestler said.