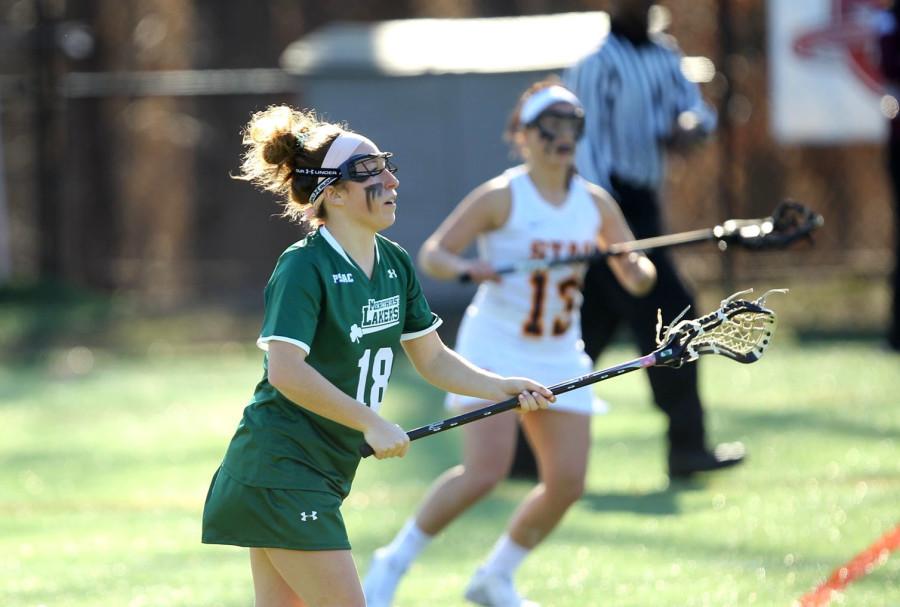 Senior Emily Koestler (above) scored one goal, her third of the season, in the Laker’s 15-10 win over Roberts Wesleyan.

“As our regular season comes to an end, we are continuing to focus on becoming stronger and more unified as a team,” said Head Coach Brigid Hurley. “We play together, we play for each other, and we always push each other to be the best we can be.”

On Wednesday, April 6, the Lakers headed to Rochester, N.Y. to take on Roberts Wesleyan in hopes of breaking the program record for consecutive wins.

Sophomore Kristin Anderson led the Lakers in points, with four goals and one assist. Senior Olivia Keirn and junior Carly Zimmerman both had three goals in the Lakers 15-10 win.

“We are coming off of that [breaking consecutive wins record] and going into the weekend with high expectations,” said Gebhardt. “As we found out last year, only having four losses can end your season early, and this year we are looking to go all the way.”

On Sunday, April 10, the Lakers hosted East Stroudsburg and kept their winning streak alive with a 10-7 win.

With only a few games left, the Lakers are taking it day by day, to come closer to achieving their goal of getting to the NCAA championship in Denver.

“I think we are coming closer to achieving this goal by proving ourselves week in and week out,” said Zimmerman. “We started out the season ranked 13th in the country and we are currently ranked 5th. Our hard work is paying off as we watch our ranking rise, and we can see our goals becoming more of a reality.”

The Lakers will be back in action on Saturday, April 16, at Bloomsburg University.

“We are aiming to keep our momentum moving in a positive direction and take us all the way,” Gebhardt said.

Sadly, their win streak came to an end on Tuesday, April 12, against IUP in a tough 11-7 loss.