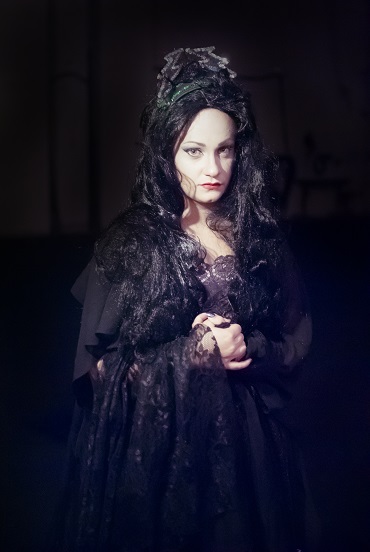 Pictured is Victoria Mcllvain, senior Performance major, as her character Queen of the Night.

The D’Angelo Opera Theater presents a fully staged production of Mozart’s “The Magic Flute.”
There will be two performances: one on Friday, April 15, at 8 p.m. and the other on Sunday, April 17, at 2 p.m. in the Mary D’Angelo Performing Arts Center at Mercyhurst University.
Mozart’s “The Magic Flute,” K. 620, is an opera in two acts to a German libretto by Emanuel Schikaneder, who actually played the role of the Papageno in the opera’s premiere back on Sept. 30, 1791.
The work is in the form of a Singspiel, a popular form that includes both singing and spoken dialogue.
This is one of Mozart’s last works, written during his last year.
The opera will be sung in English even though it was originally written in German, with musical direction by Louisa Jonason and stage direction by James Bobick.
The conductor is none other than Joseph Kneer, D.M.A.
Seventeen characters are in the play, which is one of the reasons why Jonason chose this opera. She was able to use all of her singers in the program, one of whom is an Intelligence Studies major.
“This opera is good for the whole family,” Jonason said.
“We are actually hoping that people bring their children.”
“This opera is like a fairy tale. The struggle between good and bad throughout the theme,” Jonason said.
Kneer is one of the conductors for the Chamber Orchestra, which is why Jonason approached him and asked him to conduct the opera. It was the most logical choice.
“Conducting opera is the most difficult and he knows opera which is why he was the best choice,” Jonason explained.
The last time this opera was performed by the D’Angelo Opera Theater was 10 years ago.
They have done all of the Mozart operas twice.
They usually do these types of operas because they have a larger cast size, so they are able to use more people.
For this opera, there are 17 students in the cast, nine more in the chorus and a few more students in the orchestra.
They have one student doing the makeup which she designed and is very “fanciful” according to Jonason.
“It is being sung in English because it is a comedy, so I want to invite everybody to come because I think anybody will certainly enjoy it even if they do not know opera,” Jonason said.
Kneer says that the music is fantastic from beginning to end.
“You have great arias in it and very funny ensembles because there is a great mixture of humor and drama within the music itself,” Kneer said.
“There are a lot of fun challenges conducting an opera.
It is way different because you have to be ready because you have to know exactly what is going to happen onstage,” Kneer said.
As the conductor, he or she must know the stagings because they have to know where the singers are and if they need influence from the musicians.
The conductor needs to know what role to play at any given time so they do not intrude on what the singers are doing.
Kneer has only conducted one other opera, “La traviata” by Giuseppe Verdi.
It was the concert version with just piano and singers.
“Papageno is definitely the most compelling character in the opera,” said Kneer.
Jared Hancock, senior Performance major will be Papageno at this performance.
An opera as an art-form is a very extensive production.
“There are only eight different parts for the orchestra, and it is a special orchestral transcription of the original so all of the wind parts have been condensed into three woodwind parts.
“The strings are about the same as the original,” said Kneer.
According to Kneer, there are mostly students playing in the orchestra, but there are also a few hired professionals as well.
In this performance Kneer will be in the pit with eight players who will be in the upper level of the pit along with the chorus.
Nicholas Nasibyan, a junior music education major, is playing a glockenspiel part on a keyboard.
Bobick, who is in charge of stage direction, has the stage set up in a multilevel manner.
Tickets are $15.50 for adults, $12.50 for seniors and students, and $4 for youths 12 and under and Mercyhurst students with ID.