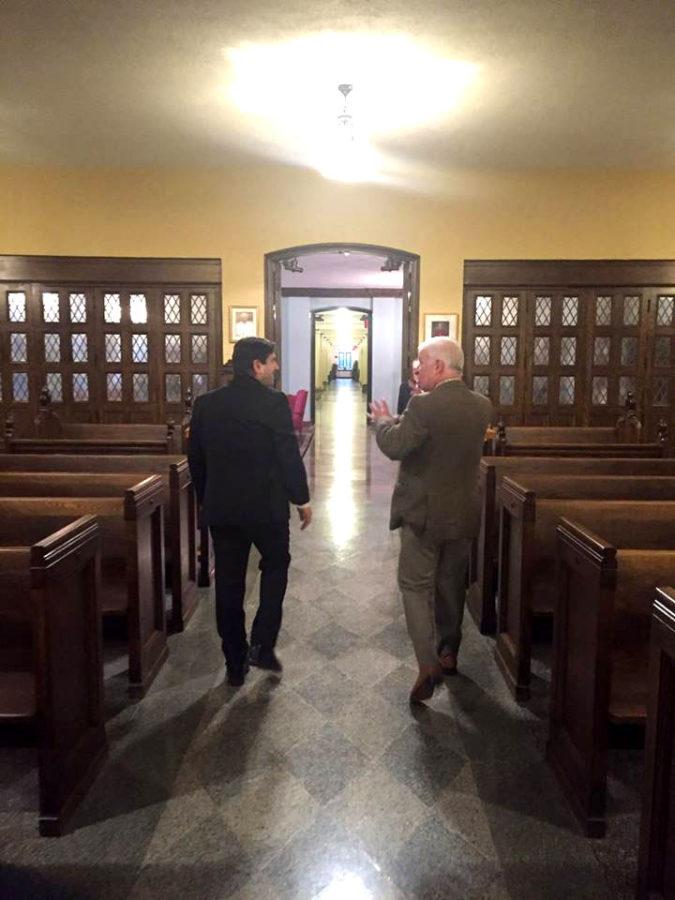 David Dasuey, Ph.D., and Maccabe walk through Christ the King Chapel during Maccabe’s visit to Mercyhurst.

Last week, Christopher Maccabe, CB, of Northern Ireland, made the voyage overseas to speak at Mercyhurst about securing peace on a global scale.

Maccabe is known for his work in conflict resolution and political development in different areas of the world. He was recently appointed director for the Centre of Democracy and Peace Building in Belfast, Northern Ireland. He also works for the Belfast Conflict Resolution Consortium, or BCRC.

During his talk in the Mercy Heritage Room on campus, he discussed the Northern Ireland conflict, often referred to as the Troubles, that occurred during the latter half of the 20th century.
He stressed the intricacy of the conflict, and how the dynamic between Catholics and Protestants and loyalists and unionists played a role.

“In countries where there is conflict, making the transition to peace is difficult,” Maccabe said.

Maccabe worked for the British during the conflict. He noted that his fountain pen was used by the Irish prime minister to sign the Good Friday Agreement, a major peace deal between Ireland and Northern Ireland.

He also focused on some of his work in the Basque country, a region of Spain, and Sri Lanka, where he helped to promote peace.

Others areas Maccabe has worked include Zanzibar, the Middle East and the Balkans.

Maccabe was invited to Mercyhurst by David Dausey, Ph.D., provost and vice president for academic affairs, and several students who met him during a trip to Belfast during their semester abroad in Ireland. These students, who were instrumental in planning Maccabe’s trip, include current junior Sam Lioi, and recent graduates Tom Connolly and Matthew Vendeville.

“The experiences [Maccabe] shared are reflective of Mercyhurst’s history, tradition, global mission and interests. There are few words to describe someone like Chris. To witness his humility, wit and charm in person is assuring of the work for which he is sought the world over,” Connolly said.

Vendeville was also impressed with Maccabe.

“Having Chris come to Mercyhurst was an extraordinary experience that all in attendance quickly understood. It’s hard not to be fascinated by a guy who has shaken hands with the Queen of England and Bill Clinton, among other amazing people,” Vendeville said.

Maccabe said he met President Bill Clinton several times during different meetings, as Clinton played a large role in the Northern Ireland conflict. At one point, after a breakthrough had been made at a meeting, Maccabe described how Clinton addressed him.

“He came over to me, put his arm around me and said, ‘Chris, we did it,’” Maccabe said.

Maccabe said one thing that he learned from the conflict in Ireland that he used in future peace negotiations is the importance of discussion and conversation. The bigger the conflict, he said, the more dialogue needs to occur.

“His ability to earn and maintain the trust of others from all walks of life is a lesson from which we can all learn and for anyone interested in conflict resolution and peace process development,” Connolly said.

Maccabe said anyone interested in pursuing a career in peace building or conflict resolution should go out and do things that are hands-on. According to him, it is difficult to get started unless there in a conflict at hand, but, “you need to start somewhere.”

Additionally, “personality and approach is a very important part of it,” Maccabe said.

While the violent conflict is largely over, there still exists segregation among Catholics and Protestants in Northern Ireland. Part of the BCRC’s work involves working to overcome the segregation in housing in Belfast.

“There is a huge effort being made by the housing authority,” Maccabe said.

However, one element that unifies all Irish people, Maccabe noted, is sports. While Ireland and Northern Ireland have individual soccer teams, every other sport is played as one combined Irish team.

Maccabe stayed in Erie for several days before returning home to Northern Ireland continue his work at the BCRC and Centre for Democracy and Peace Building.