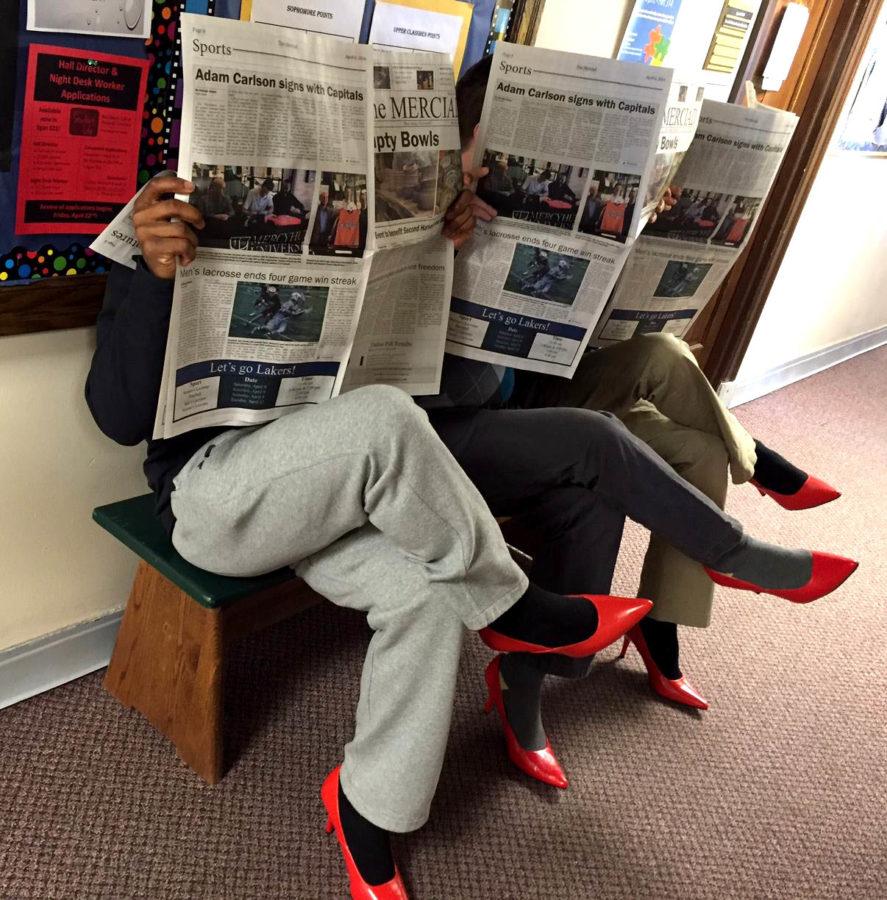 Walk a Mile in Her Shoes participants taking a break from practicing their poses.

Mercyhurst Equality of Women, or MEOW, has been inspired by the organization Walk a Mile in Her Shoes. They have decided to host their own walk here on campus on Saturday, April 16, at 1 p.m.

Every day another person is sexually abused or assaulted. The Walk a Mile in Her Shoes organization looks to bring awareness to sexual assault everywhere.

“You can’t really understand another person’s experience until you walked a mile in their shoes,” is the slogan of the Walk a Mile in Her Shoes organization. The group asks that the men take off their sneakers, put on a pair of high heel and walk a mile in women’s shoes.

Every day, people, like me, are scarred for life because of another person’s aggression. Colleges across the nation are being affected by sexual assault.

“MEOW feels that college campuses need to put more effort, not only into raising awareness, but into actively taking steps to decrease such acts from occurring to their students,” Danielle Dros, vice president of MEOW said.

Raising awareness is important for future victims and past ones. After my assault, I felt alone, scared and humiliated. If there had been more support when it happened, I could have gotten help sooner.

For a long time, people ignored the problem, aggressors got away with assaulting people, victims were blamed and left to suffer in silence. Finally, people are talking and walking to make a change.

People around the world and across the country are taking steps to shed light on this issue that has gone on for too long.

“One out of every six American women and three percent of American men have fallen victim to a sexual crime,” the Rape, Abuse & Incest National Network said.

Many people think that women are the only victims to sexual assault. It is not true; anyone can be affected by the aggression of another human being. This is why MEOW is bringing attention to this issue. Having men take a walk in the women’s shoes, which is not simple, is a way to have fun while discussing this dark issue.

After the walk is over, there will be free food, a conversation about domestic violence, sexual assault and gender equality. All Mercyhurst students are welcome to attend, while men and women are encouraged to sign up for the walk by emailing their name, email address and shoe size to mercyhurstequality@gmail.com.

We cannot sit back quietly any longer. We need to stand tall and walk the mile together.