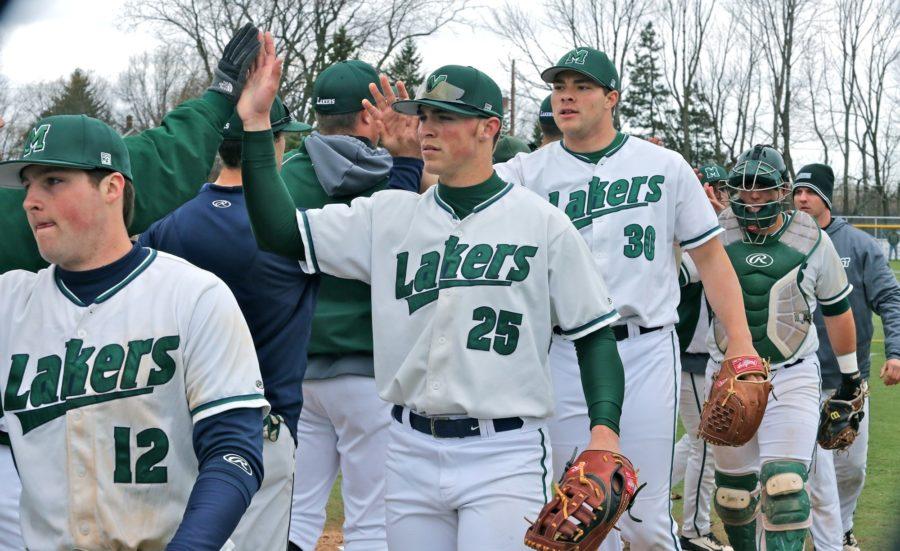 The Lakers beat Pitt-Johnstown 8-2 on Saturday, April 16. This was an important victory for Mercyhurst’s momentum. They were 27-9 at that time. Players from left to right: Austin Alonge, Hank Morrison and Colin Mckee.

Head Coach Joe Spano knew he had to make a move in order to keep his Laker baseball squad in contention to have a similar campaign from last season.
A squad that won 40 games and advanced to the College World Series for the first time had won its first 15 contests, but by March 20, 2016, was plagued with three fewer losses than all of the previous campaigns.
The Lakers were still holding opponents to only 3.5 runs per contest while scoring more than five, but these figures were still considerably lower than 2015.
The Lakers immediately responded by breaking out the power and rattling off 12 straight wins between March 22 and April 8
The club’s current 18-1 stretch, since losing three of four to Seton Hill, sees them at 28-9 for the year and in sole possession of first place in the West at 16-4 in the PSAC competition.
The Lakers’ magic number to clinch the West is down to 11 ahead of a critical home-and-home with the Cal University vulcans beginning on Friday, April 22. Seton Hill holds a tiebreaker with the Lakers after the Griffins took three of four from Spano’s squad over the weekend of March 18.
“We all started having a better approach at the plate because we knew we had to get runs across,” first baseman Hank Morrison said after taking a doubleheader from Pitt-Johnstown on Friday, April 15. “We were all seeing the ball very well, making sure we weren’t swinging at bad pitches.”
The Laker’s current stretch sees the team hitting with the most consistent power they have produced all season, putting up 20 more runs in their 12-game streak than in their first 19.
Individually, the Lakers have received production from virtually all its starters as evidence by its combined batting average and 246 runs batted in, fifth overall and second in the West.
Leading the charge is Senior Morrison whose .402 average is 13th overall in the PSAC and seventh in the West. Morrison has started all 37 games this season, splitting time between first and right field. Although his Lakers are 15-1 when he is in the infield and 21-6 when batting cleanup. Despite hitting there and only sitting fifth on the Lakers in slugging percentage, his 49 hits lead the team, and his .479 on-base clip is second to fellow infielder Austin Alonge.
“I was just trying to hit the strikes and get the pitches that I wanted and it worked out for me,” Morrison said.
Meanwhile, Alonge is a consistent hitter in his own right; second on the team at .396, his 14 multi-hit games leading the team. He and sophomore Daniel Elliott are also the only two Lakers to draw more than 20 walks this season.
The pitching-rich Lakers have also been a factor into the team’s recent success, leading the PSAC with a 3.26 ERA and a .206 batting-average against while throwing eight shutouts.
Leading the charge is redshirt junior Colin McKee, second in the PSAC in both ERA (1.41) and wins (one of four with seven). He is also one of five pitchers to throw five complete games.
“This season, I have been able to utilize all four pitches in most counts with confidence to keep batters off-balance,” McKee told NCAA.com on April 1. “For me, everything works off of my fastball, which I have been able to throw to both sides of the plate consistently. My slider was a new pitch for me last season and in the last year it has developed into my main out pitch.”
Meanwhile, senior and Willoughby South product Cam Knott followed up McKee’s performance with six innings of his own in the second game of the doubleheader, allowing a home run and only four other hits. He sent down 10 batters on strikes en-route to an 11-1 victory, also his seventh.
“As a whole, the entire pitching staff has great chemistry,” said McKee. “Having Cam in the rotation with me gives me great confidence entering a series that the team will be getting some quality innings from our starters.”
The Lakers return to action Friday, April 22, as they prepare for a doubleheader with Cal U. as the first step to determining the West Division champion.