’Tis the season for student recitals 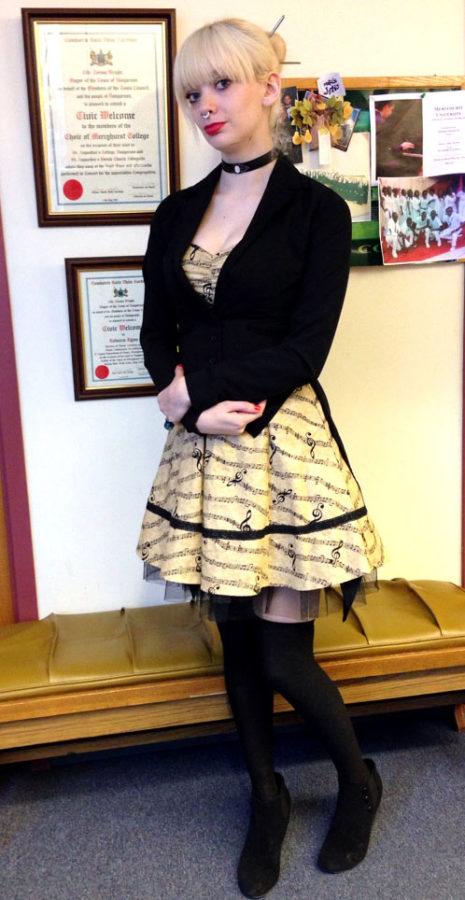 Michelle Elleman-Cali, senior music major, is one of the students who has an upcoming recital.

Michelle Elleman-Cali, senior Voice major, is having two performances of her senior recital.
The first is her dress rehearsal which will be informal. It takes place on Saturday, May 7, at 5 p.m. in Walker Recital Hall.
She realized that many Voice majors may not be able to make the actual recital because of the choir concert dress rehearsal.
Because of this, she decided to make the dress rehearsal another showing.
The “official” recital will take place on Saturday, May 14, at 1 p.m. in Walker Recital Hall.
There will be a reception with free food following the recital in the lobby of Walker.
The May 14 performance will be her last performance at Mercyhurst before she graduates.
The songs that she has chosen to sing will be in French, English, Italian and German.
Elleman-Cali had chosen too many songs for her recital, so the set list is not finalized. It would have gone over the set 30-minute to 45-minute time that is allowed for the recitals.
The recital will consist of standard repertoire with few arias because she is a Mezzo-Soprano singer, a type of classical female singing voice whose vocal range lies between the soprano and the contralto voice types.
Richard Danielpour is the most recent composer that Elleman-Cali has chosen for the recital.
She will sing “Margaret’s Lullaby” from the dark and sad opera “Margaret Garner.”
The opera is based on a true story.
One of the first songs that she learned through her first voice teacher was written by French composer Gabriel Faure.
It is called “After A Dream.”
“I have a couple of Schumann actually because I love Schumann and Schumann loves me, apparently, because he writes everything for Mezzos,” Elleman-Cali said.
“‘Widmung’ is another old one that I have performed, actually, about five years ago.
It means dedication or devotion and it is about talking to a loved one.”
She plans to also sing “Prayer for Peace,” a French song by Francis Poulenc.
It is a prayer written to Mary praying for peace for France to not get involved with World War II.
It also became very popular after the bombing in Paris.
There are a variety of songs that she is still deciding whether or not to perform.
“This is music that I have learned and worked on over the years,” Elleman-Cali said
There is no underlying theme for the recital.
It is a culmination of songs that she has related to throughout her life and music career thus far.
Joyce Kriner is the accompanist for the recital.
Elleman-Cali is looking forward to graduation. She did half of her music education at Jamestown Community College and the other half at Mercyhurst University.
Eventually, she wants to get back into music therapy when she has more time to complete the degree.
She began studying music therapy, but switched to majoring in Voice.
Elleman-Cali is not the only music major that has an upcoming recital.
Jared Hancock, senior voice performance major, is having one on Sunday, May 1, at 7 p.m.
Sabrina Sosa, senior music major, has a recital on Saturday, May 7, at 1 p.m.
Kevin Timko, junior music therapy major, is having a recital on Sunday, May 8, at 5 p.m.
Timko’s recital is followed by Isaiah E. Howard, junior performance major, at 8 p.m.
Like Elleman-Cali, Christina Cacchione, junior performance major, is also having a recital on Saturday, May 14, at 7 p.m.
On Sunday, May 15, Jamie Zdunski has a recital at 1 p.m.
The final recital is Elizabeth Klucher, senior performance major, which is on Thursday, May 19, at 7 p.m.
They are all taking place in the Walker Recital Hall.