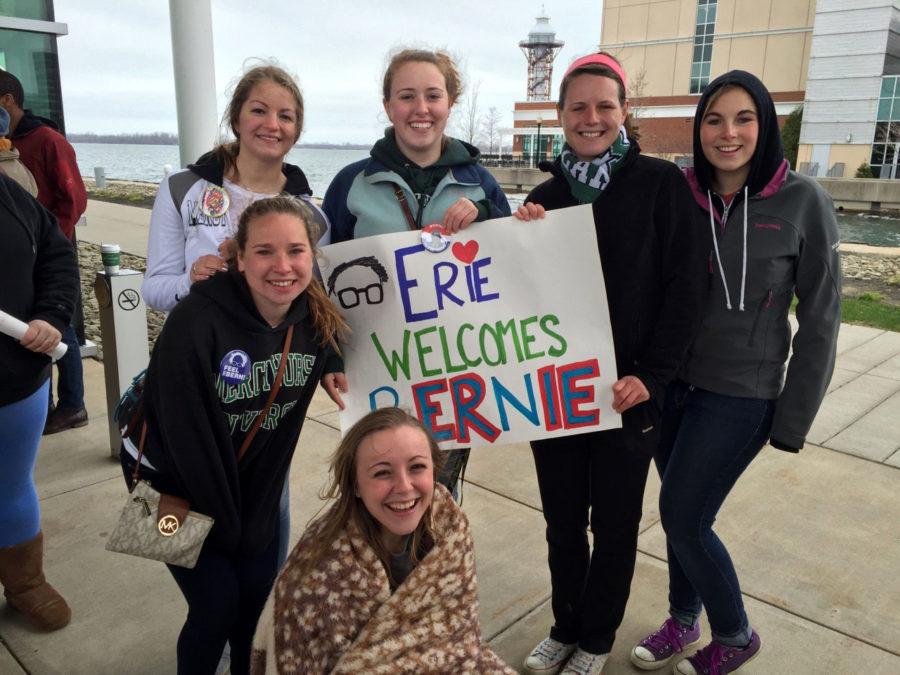 Students hold up their sign and show support for Sanders.

The Vermont senator gave a 50-minute speech and urged people to vote in the primary next Tuesday.

“Let’s see the great state of Pennsylvania lead this country into the political revolution,” he said in an article for the New York Times.

Sanders did not focus on the recent primary in New York or talk about his competitor, Hillary Clinton, but he instead devoted his speech to telling locals what he can do for Pennsylvania.

“If elected president, Mr. Sanders said he would change trade policies that had hurt states like Pennsylvania and ensure that American workers would not have to compete with workers in countries with lower wages,” Yamiche Alcindor wrote in an article for the New York Times.

Phil LiPari, a sophomore intelligence studies major, went to the rally and talked in greater detail about what Sanders said.

“[Sanders] really appealed to the idea that we should take this country forward and start taking care of the people in our nation who can’t take care of themselves – the weak, the old, the poor, and the sick. He focused a lot on the need to create fair paying jobs through unions and by rebuilding our infrastructure. He talked on women’s rights quite a bit, highlighting the disparity between male and female salaries. Then, he talked about the environment and the need to transition to green energy alternatives to make sure we leave behind something better than a rotting world,” said LiPari.

“Other than that, [Sanders] really focused on the wealth concentration in the upper one percent and the need for them to inherit more tax burden to make sure that the rest of the country has access to basic goods and services.”

Other Mercyhurst students joined the crowd to hear what Sanders had to say.
“I went [to the rally] because not everyday does a major political candidate or figure come to Erie. I felt it was important to attend a political rally because it may be a once in a lifetime opportunity,” said Jonathan Hartman, a senior business competitive intelligence studies major.

Hartman commented on the energy he felt at the speech.

“The event itself was electrifying once Bernie came on stage. His comments and overall speech were moving and seemed to connect everyone in the room, even if they weren’t a supporter,” said Hartman. “Being at the rally made you feel like you were part of something more, and not just a single individual. It was actually very patriotic and I really enjoyed it.”
Riley Norton, senior social work major, agreed with Hartman.

“[The rally] really was an awesome atmosphere. It was surreal to be there with my fellow classmates to listen to someone who could have the chance to implement fundamental change in our everyday lives,” said Norton. “He was so personable and relatable, and it was a truly great time.”

Primary elections will be held in Pennsylvania next Tuesday, April 26.