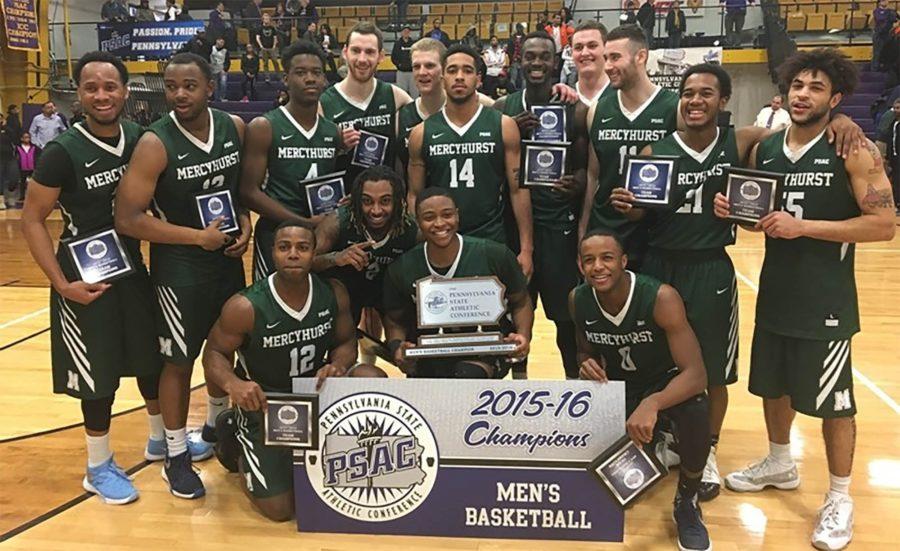 Another successful slate for Mercyhurst athletics is nearing its conclusion, with five sports in contention for postseason action in May.

A quick reflection on this season saw some firsts, feats, and exciting competition, a schedule that saw 13 fall and winter teams reach at least their conference playoffs, three reaching the NCAA Tournament and five spring squads primed to turn the trick in the coming weeks.

The season’s first highlight occurred on Sept. 5, with nearly 2,500 fans filing into Tullio’s stands to see Brendan Boylan throw for 305 yards and three touchdowns as the Laker football team won 35-20 over Bentley and went on to start 3-0. Six days later, Joseph Korb sent home the game-winner in double-overtime for the men’s soccer team’s first win of the season.

Another squad able to score early and often was Stacy Gaudette’s field hockey women. After falling in their first four contests, Jessica Brandon’s hat-trick on Sept. 15, led to a 6-1 win in Mansfield to continue a roller-coaster season.

Nenad Vidaković and his soccer team finished a winless six-game non-conference stretch that all but ensured its No.9 preseason ranking would be difficult to repeat. However, their fortunes turned in the first weeks of October when the men won 3-0 in Johnstown on Oct. 3.

Marty Schaetzle’s football team was heading in the opposite direction, as Clarion upended the Lakers, 41-27, on Oct. 3, and spoiled the celebrations for Brandon Brown-Dukes, as he became the Lakers’ all-time leading rusher with 3,382 yards and counting.

Football, field hockey and women’s soccer struggled in the end of October to fall out of postseason contention. Men’s soccer took home the regular-season title but then fell to Slippery Rock in the semifinals on Nov. 6.

That set the stage for the winter season, with all four major sports setting high expectations. Arguably the most successful of these sports, Gary Manchel’s men’s basketball squad, were seeking to repeat their NCAA bid, and once again used their top-ranked defense to their advantage.

After a slow start, Michael Sisti’s women’s ice hockey team won seven of their next 10 games, posting a 5-1-1 Nov. The men’s squad saw their first highlight on November 7, when Rick Gotkin earned his 500th win, punctuating a 5-1 stretch to open conference play.

December saw women’s basketball’s Adrienne Kloecker top 1,000 points, the 17th to do it in a Laker uniform, and a head coaching change in women’s lacrosse, as Cecil Pilson announced he was leaving for Butler on Dec. 17.

The ice hockey squads continued their sizzling play in January with Sisti’s women posting a 4-3-1 record. On Jan. 30, Mercyhurst and Syracuse exchanged tallies in the first two periods, but a penalty on the Lakers put the Orange on the power-play, resulting in a Mercyhurst defeat. On the other hand, the men’s squad posted a 5-4-1 month, taking at least a point from all but one of their opponents, but fell all three times they allowed at least six goals.

Men’s and women’s hockey combined to lose a single game in February, to secure spots in conference tournaments. The women won five in a row, reulting in a clinch of their 16th straight regular-season conference title.

A win by women’s basketball on Feb. 13 set the stage for Natalie Piaggesi to score her 1,000 point four days later, and then for Hurley to open the spring season on Feb. 20 with a resounding 19-7 win for the 13th ranked women’s lacrosse squad.

The following day, Joe Spano won his 500th game as manager of the Lakers’ baseball squad, who struggled to defend their No. 3 preseason ranking but rebounded in March and April to take over the top spot in the West.

On March 6, men’s basketball made history in their own right, toppling West Chester, 70-67, to win their first-ever PSAC tournament crown.

Women’s lax finished off a remarkable 7-0 March en-route to a program-record consecutive victories.

April also saw the rise of the baseball squad to a 16-2 stretch to open the month as part of a larger 21-4 run dating to March 20.

In April, women’s lacrosse capped off a 15-2 season with a spectacular 11-6 win over postseason rival Lock Haven to take the top spot in the PSAC.

Be on the lookout for the PSAC semifinals in women’s lacrosse on May 6 at Tullio, and get ready for another exciting season of Laker athletics in the fall of 2016.