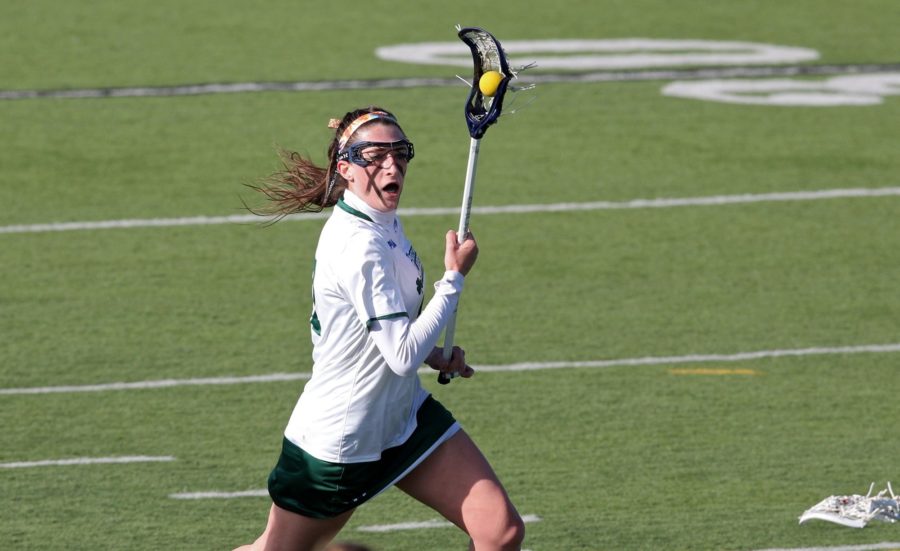 The No. 8 ranked women’s lacrosse team defeated the No. 10 Lock Haven University Eagles, 11-6, on Sunday, April 23, clinching the top seed in the PSAC Tournament.

“It was an awesome feeling to be recognized on Tullio Field. It meant a lot, especially to have our parents and families out there, because we wouldn’t be going to the school and playing without their constant support. All eight of us were a little emotional, but mainly were excited and pumped up to play and beat this team,” senior Kyla Keefe said.

The Lakers started out the game strong, never giving Lock Haven a chance to get ahead. The first two goals were scored by junior Janelle Williams, followed by a goal from Keefe, giving the Lakers a 3-0 start.

Mercyhurst took a 7-3 lead at the half with goals by sophomores Kristin Anderson and Grace Lawson and senior Olivia Keirn, who got a shot past Lock Haven’s goalie with 24 seconds left in the first half.

“This was a huge game. We all came in excited, but also very focused, knowing we had to play our top game to beat this team. We’ve lost to Lock Haven every year I’ve been a part of the team. So we all came out with a fire ready to get our revenge. No better day to do it than on our own turf on senior day,” Keefe said.

The Lakers scored three unanswered goals again to start the second half. Williams was the first to score in the second half as well, tallying her third goal of the game assisted by senior Emily Gebhardt. Goals to follow were scored by junior Carly Zimmerman and Gebhardt, giving the Lakers a 10-3 lead.

While the Eagles answered with two goals, junior Morgan Parker gave the Lakers one more point giving them a total of 11 for the day. The Lakers outshot the Eagles 32-14 and held a 14-5 advantage in draw controls.

“The atmosphere during the game was very intense. Everyone came out with their A-game and ready to dominate the field,” Williams said.

Winning goaltender was junior Gabby Gravino, who had four saves.

The Lakers first game of the PSAC Tournament is Friday, May 6, for the first round of the semifinals at home on Tullio Field.

“Right now we don’t know who we will play yet because the final spots haven’t been locked in, so we are just focusing on ourselves and improving our play. Heading into the tournament we certainly have the PSAC Championship on our mind, but we know that first we must focus on that semifinal game and cannot take it lightly,” Keefe said.