We get by with a little help from Bill 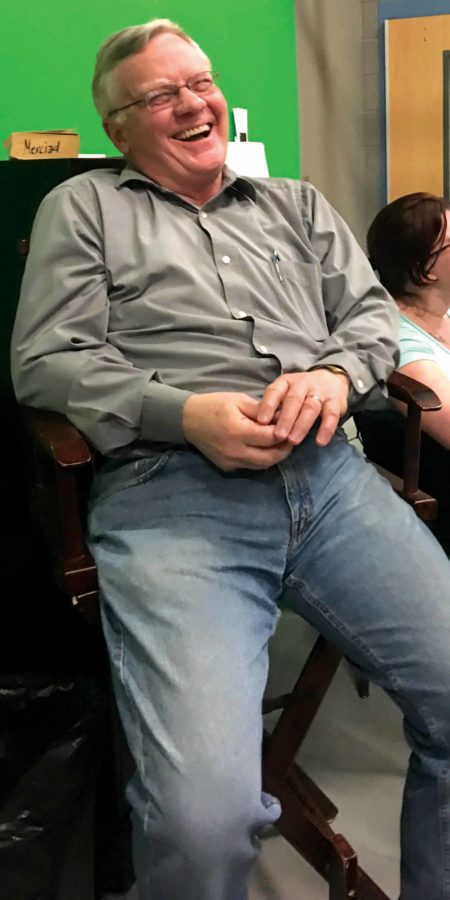 A farewell to our beloved adviser of The Merciad, William Welch.

“Good evening,” rings through the Merciad office each Tuesday evening as William Welch, or Bill as he is affectionately known in the office, enters, a cue to the staffers that the Beatles anthology will soon be playing on loop while they work.

The Intelligence Studies instructor spent 29 years as a reporter and city editor with the Erie Times-News before lending his expertise to the small student-run paper. After a span of almost 240 issues, averaging 20 issues a year, with a one year hiatus, Welch is stepping down as the adviser at the start of the 2016-2017 year.

“It’s not a title–it’s a headline,” Welch growls as he brandishes a rolled up newspaper at an editor.

Production nights have gone this way for 13 years, Welch handing out advice, as well as word choice options, to The Merciad staffers as they navigate the waters of collegiate journalism. Over the years, Welch advised many editors, some of whom would go on to report and edit for professional papers. Stacy Skiavo, the 2012-2013 editor-in-chief would go on to be a food writer for A Taste of Pittsburgh.

“Bill was a great adviser and friend. He taught me the mechanics to be a good editor and how to work under a deadline. Some nights were tough and we all wanted to pull our hair out, but Bill stayed with us to the end and we always had some laughs along the way,” Skiavo said.

It was not all laughs, however. There were a few articles, especially this past year, that ruffled a some feathers.

Welch said one night this was the first year he had been called to the “principal’s office.”

Welch handed out advice to everyone, often using extreme analogies to humorously make his point.

Jenny Sabliov, the arts and entertainment editor for the second half of the 2015-2016 year learned this lesson early on.

“When he was telling me that in journalism you always use he or she ‘said,’ Bill stated ‘if you ever use anything else, a bolt of lightning will come down and strike you,’” Sabliov said.

His advice extended from keeping the staff out of legal troubles to creating an effective page layout. He coined the phrase, “no photo is good enough to be six columns.”

Green reporters often felt the wrath of Welch. Whether being the witness of furniture violence or by having an article thrown out, reporters’ lessons were unconventional; and thus, unforgettable.

“One of the first times I wrote for The Merciad, Bill told me that I argued with myself because I discussed both the pros and cons of the topic. Needless to say this was not the best first impression. Since then he has taught me how to form a well thought-out argument, and now he has entrusted me with the opinion editor position,” Amber Matha, 2016-2017 opinion editor said.

While some stick with journalism or even communication, others go on to unrelated fields but find other ways to integrate their training into their everyday life.

“My senior thesis class can’t stand me. I’m always pointing out commas and date formatting issues. It is all small stuff but what Bill has taught me about detailed editing is really important,” Sami Rapp, the 2015-2016 editor-in-chief, said.

“No one cares about the Merciad and the progress of the students like Bill Welch does,” said Ryan Kushner, 2015-2016 opinion editor. “His passion for journalism and teaching inspired me to try to do better with each article.”

And if they did not learn anything from the endless hours of putting the paper together, they at least have some great stories of Welch. 2015-2016 Photo Editor Margaret Urso may have one of the best stories.

Almost every night, a pop culture reference came up. Excitedly, the staff took the opportunity to show Welch what the kids were listening to and watching these days.

“One of my favorite memories is showing him the Saturday Night Live alternate ending to ‘Casablanca,’” said 2016-2017 Editor-in-Chief Karah Hollis. “Maggy, our photo editor, and I had been quoting it all night, so we decided to let Bill in on the joke. As we sat there watching the video with him, we shared a memorable laugh together. It was one of the funniest moments I can remember; of course, other than the multitude of anecdotes that almost put me in tears because they were so funny.”

Welch’s wife, Patty, was a star of the studio, thanks to her wonderful baking.

With an opinionated and authoritative persona and voice, Welch could at times come across stern. He is known in the Intelligence department as a bit of a stickler, especially when it comes to proper grammar.

“I’m not going to lie, Bill used to intimidate me. He is very direct. But after a few weeks as an editor, that intimidation turned into respect. I have truly enjoyed working with and learning from Bill, and will miss having him in the office next year. Our staff had some really fun times,” Catherine Rainey, 2016-2017 managing editor said.

Welch agreed to using this story when he realized it would push Flash Gordon off Laker Living.