Locals ‘Dig into Erie’s Past’ 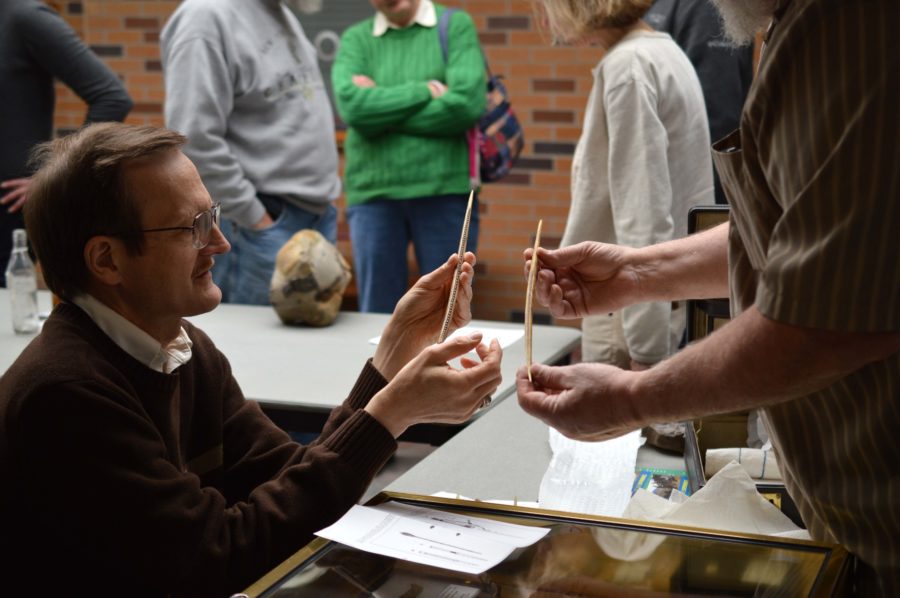 Assistant Professor of Geology and Director of Paleontology, Scott McKenzie, volunteered his time at ‘Dig into Erie’s Past.’

On Sunday, April 24, Mercyhurst held its first ‘Dig into Erie’s Past’ community event exploring local artifacts. Community members came to campus to get information about artifacts such as stones, arrowheads and fossils from students and professors in the archaeology department.

“It was a good opportunity and excuse to get public on campus and remind everyone that we have an archaeology department on campus that is a flagship department, and also to let people know that we are a resource in their backyard,” said Edward Jolie, assistiant proffessor of anthropology/archaeology and director of the Perishable Artifact Lab.

Fifteen families came out for the event. Some people brought artifacts, while others just wanted to explore other people’s collections.

“It was an extension of public outreach that we do. We took some people on impromptu tours,” said Mary Ann Owoc, Anthropology and Archaeology Department chair.

Many attendees were excited about the event and already anticipating the next one.

“We even had people expressing interest in volunteering in the future and helping out with lab work,” Jolie said.

“People don’t always appreciate that [the young years] are the formative years for stimulating and gaining an interest in science and the world around you,” Jolie said.

Owoc added that not only the kids, but the adults were enjoying themselves, too.

Faculty from the archaeology, anthropology and geology departments, as well many undergraduate students, offered their time at the event. Since the event, the volunteers have received positive feedback.

“A treasure trove of experience right in our own backyard! Thanks for your help!” said Patricia Hamilton, community member.

Jolie is excited about the success of the event.

“It was an experiment and we’ve already gotten great feedback. It was a great opportunity to give back to the community,” Jolie said.

The archaeology department hopes to hold more “Dig into Erie’s Past” events for the community in the future.