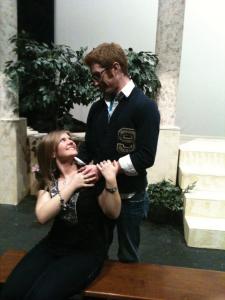 The talented students of the D’Angelo Department of Music will perform Mozart’s comic opera this weekend.

“Cosi Fan Tutte” will be performed at the Mary D’Angelo Performing Arts Center on Friday and Saturday at 8 p.m. and Sunday at 2 p.m.

As one of Mozart’s most popular operas, “Cosi Fan Tutte” has a reputation for being an entertaining production.

Moreover, the Mercyhurst rendition will be sung in English, making the performance more accessible to opera aficionados and novices.

The music is lovely, having been described by director Brent Weber as “medicine for the voice, as well as for the ears and souls of the listeners.”

The comedic “Cosi Fan Tutte,” which translates loosely as “This or That” or “Women Are Fickle,” comments on inconsistency in love with its tale of humorous deception.

In the story, two officers, Ferrando and Guglielmo, accept a bet made by Don Alfonso that tests the faithfulness of their lady lovers, Dorabella and Fiordiligi.

The officers pretend to go away to war, but then they come back to their women disguised as Albanian men.

Over the course of the opera, each officer manages to seduce the other’s lover and in the end have marriage contracts signed.

The officers finally reveal themselves to the women, having seemingly proven, as Don Alfonso had originally declared, that all women are fickle.

As the performance is triple cast, each show will feature a different set of singers.

Weber said, “The triple cast has made the rehearsal process a little crazy, but it is a great educational opportunity for the singers.

“It will be a different show each night as different students interpret each role.”

Junior Elizabeth Zurasky, who will perform the role of Despina on Friday night, said, “Rehearsing for the show has been really exciting.

“It’s been really cool to see each actor’s interpretation of the different characters.

“We’ve all helped each other with ideas and character traits and I’ve learned so much through this experience,” she said.

There are also many different artists involved in the production aspects of the opera, and Weber described the process as something of a collaborative effort.

“I think collaboration is what Mercyhurst is all about,” said Weber.

“I could not have directed this opera without them,” Weber said.

The opera includes both music education and performances majors from freshmen to seniors.

There will also be two guest performers, with the role of Don Alfonso played by Erie resident Ken Daub, and Friday and Sunday night’s Ferrando played by Mercyhurst alumnus Andrew Ferguson.

“This is a difficult opera to produce, especially with these students’ busy schedules,” Weber said. “I am very proud of all of them for really coming to bat.”

Tickets for “Cosi Fan Tutte” are only $2.50 for Mercyhurst students with ID.