Ian Wild stars in two Mercyhurst sports with no problem 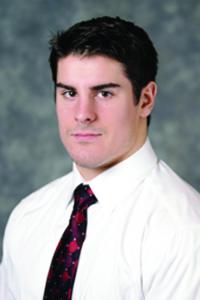 Ethan Magoc photo: Junior Ian Wild is a two sport stand-out for the football and lacrosse teamsMercyhurst junior Ian Wild can juggle many challenges within his schedule, but the way he carries himself on and off two playing fields is anything but a circus act.

Wild competed for the PSAC championship-winning football team in the fall, then made the transition this winter to his second sport, lacrosse, for the spring.

Continuing his dichotomous involvement, he is double majoring in accounting and finance all while maintaining a 4.0 GPA. As a result, Wild earned many academic honors, including ESPN Magazine First Team Academic All-District and ESPN Magazine Academic All-America during the 2010 football season.

As a defensive back, Wild has proven to be a strong asset to the Laker football team, as it posted a 10-3 record last fall en route to an NCAA playoff run.

Wild was third on the team with 79 tackles, and he also forced three fumbles. Heading into his senior season, Wild has high expectations for the Laker defense next fall.

Following a year spent on the sidelines as a medical redshirt, the junior is back with the lacrosse team this spring. The Lakers hold a 3-1 record so far, and through four games Wild has four goals and won more than half of his 43 face-offs.

“The two sports are difficult in their own way,” said Wild, a 6-foot, 2-inch 200-pound athlete. “They are both tough to keep up with mentally and physically. We do, however,a little bit more running with lacrosse.”

The transition from football to lacrosse is certainly not an easy task. But even with a high course load, Wild continues to stand out in both sports.