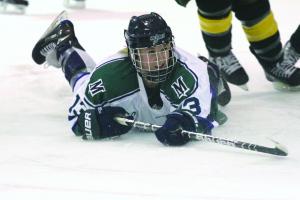 The team won a ninth consecutive College Hockey America championship to earn a trip to the NCAA tournament.

The Frozen Four, which the Lakers had reached in back-to-back years, is taking place at Erie’s Tullio Arena. Even though this season had the makings of a historic one, the Lakers fell a game short.

The Lakers had a 30-3-3 season in 2009-2010. Heading into the year, the team had star forward Meghan Agosta returning from a season with team Canada in the Olympics.

She led all of women’s hockey this season in total points, assists, power-play goals, and tied for the lead in short-handed goals. Agosta also set the NCAA record for points and goals in a career.

The Lakers also had the Patty Kazmaier award winner from 2010 in senior Vicki Bendus. This year’s team was loaded with senior talent. The other seniors included forwards Jesse Scanzano, Kylie Rossler, Bendus, and Agosta, and defensemen Cassea Schols and Melissa Lacroix.

This was the year everything was supposed to come together.
But the Lakers were given a sixth seed in the tournament and were forced to travel in the quarterfinal round. Additionally, the Lakers had to face Boston University, the team the Lakers beat in last year’s tournament, who were given a No. 3 seed.

The BU game was not considered an easy one, but one most fans expected the Lakers to get through and come home to play in the Frozen Four.

Instead, they were defeated, 4-2.
The Lakers battled in the game, tying it on two separate occasions including once in the third period.

“It’s a big disappointment, and we feel like we let people down since we (are hosting) the Frozen Four,” senior forward Kylie Rossler said. “We just need to keep our heads up and be proud of what we accomplished over the last two years.”

Going forward, the senior class left big shoes to fill. Juniors Bailey Bram and Kelley Steadman will step into the holes left by Agosta, Scanzano and Bendus. All-conference defender Pamela Zgoda will also be back, along with Samantha Watt to anchor the defense.

The Lakers may never have as golden a chance to win a championship as this year, but their chances are by no means gone. Next season, Mercyhurst hopes to earn its 10th-straight CHA championship and avenge this year’s early play-off exit.