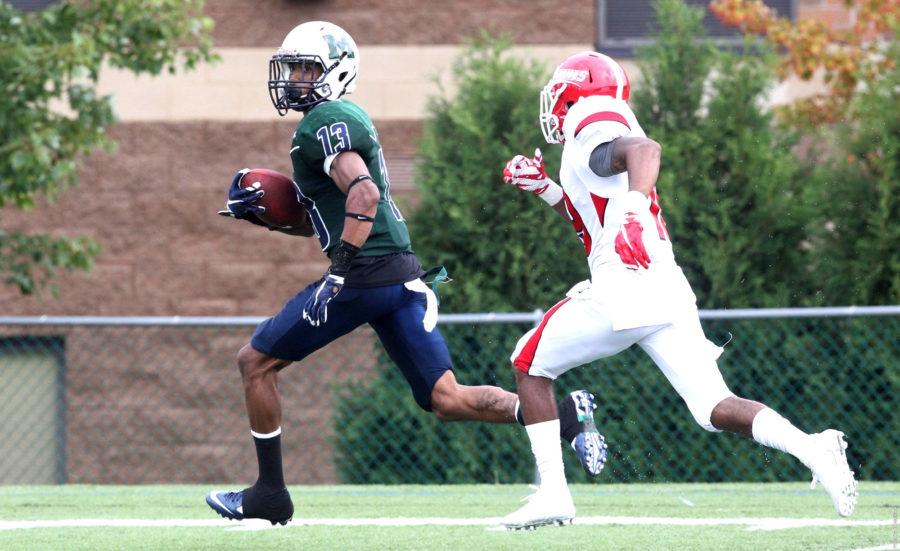 Junior Danavin Clay accomplishes a 53-yard touchdown reception against East Stroudburg on the fifth minute of the first quarter.

The Lakers football team fell short against the East Stroudsburg University Warriors on Sept. 7.
Despite some strong offensive performances, the Warriors held the Lakers off long enough for the time to bleed out, resulting in a 31-34 loss.
The Warriors would score the first points of the game, with a field goal, but Mercyhurst responded with a touchdown from junior wide receiver Danavian Clay via a 53-yard pass from freshman quarterback Doug Altavilla.
A second touchdown came at the 12:26 mark in the second quarter from a 2-yard run by senior running back Drew Robinson.
After losing the lead and trailing 3-14, the Warriors came back, putting up two touchdowns and ending the first half leading, 17-14.
The Warriors got a big boost from senior tailback Robert Healy, who put up 256 yards for the day and all four of East Stroudsburg’s touchdowns.
East Stroudsburg then put up another touchdown in the beginning minutes of the third quarter. The Lakers responded later in the third with a 31-yard field goal from senior Dylan Kondis, with the score then 24-17, Warriors.
The fourth quarter saw the most scores for the day. First, the Warriors scored another field goal, increasing their lead by 3. Altavilla of the Lakers then connected a 57-yard pass to junior wide receiver Brad Novak to put the team back within striking distance of the Warriors.
Despite the rally, the Warriors were able to score another touchdown, putting them back up by 10 points. Mercyhurst did not throw in the towel however, and Altavilla threw a 27-yard pass to junior wide receiver Brian Matthews to put the team back on track.
Unfortunately, the Lakers were unable to come back, as an onside kick following the previous score was recovered by East Stroudsburg.
The Warriors then managed to hold onto the ball long enough to keep Mercyhurst from coming away with a win. While the Lakers finished with possession, they were only given 8 seconds to react by the time East Stroudsburg punted.
Quarterback Altavilla later weighed in on the game. “As a whole offense, we were trying to build off on what we started to do at the end of the Kutztown game … I think we grew up as a whole,” said Altavilla. “We are a young team all around. If we take our momentum from the previous games… we can be a very good football team.” Altavilla was 22 of 38 for 314 yards and had three touchdowns and one interception.
On East Stroudsburg, he stated that it was “a well coached football team” and that the warrios “played to their strengths… a very well disciplined team.”
Mercyhurst also saw notable plays from running back Richie Sanders with 72 yards for 12 carries and wide receiver Zach Smith, who had four catches for 28 yards. On the defensive side, defensive back Rocky Owens had eight tackles. Linebacker Nick Slonac and defensive back Akeel Marsh also had seven tackles each, with Slonac also recording a sack and a fumble.
Defensive backs Dante Redwood and Dorian Stevens also had an interception each.
East Stroudsburg leaves Mercyhurst with its second win of the season. The Lakers fall to 1-2.