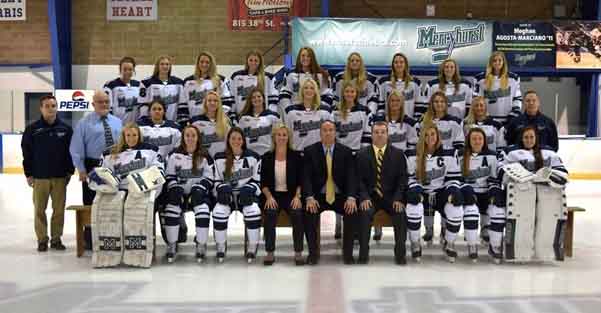 Last week, the College Hockey America league office in Winthrop, Ma., released its preseason coaches poll ahead of the start of the season the following weekend.
The top distinction belonged to Paul Flanagan’s Syracuse squad, which garnered five first-place votes from coaches and a total of 25 points overall. The Orange were followed by the Lakers, taking the other top vote and 20 points, then Robert Morris (16), Penn State (15), RIT (7) and Lindenwood (7).
Oakville native Sarah McDonnell, the winner of the CHA Goaltender Trophy and a newly named alternate captain for the Lakers, was unfazed.
“It’s not really a big deal,” McDonnell said. “They ranked us second last year. … The poll doesn’t mean anything. All that matters is the results at the end of the season.”
It turned out to be a Jan. 29 contest at the Mercyhurst Ice Center that decided the regular-season race, a 4-1 Laker win over the Orange that pushed them three points clear of Syracuse. The following day, behind a 34-11 shot differential and a critical misconduct and spearing penalty from the Lakers’ Sarah Hine four seconds into overtime, Jessica Sibley launched a weak shot past McDonnell at 3:30 to earn a split of the weekend, meaning the Orange left Erie just one point behind the Lakers in the conference standings and two points overall. The Lakers responded by rattling off a six-game unbeaten streak to finish off the regular season —outscoring their opponents 24-8—and featured a 31-save shutout from Jessica Convery the following Friday in Moon Township. Meanwhile, the Orange’s overtime victory was the first of seven consecutive wins to finish off the season as part of a greater 10-3-1 stretch after the flip to 2016, reaching the six-goal plateau twice and splitting the season series with the Lakers in the process. But on Feb. 20, Senior Day in Erie, Penn State was unable to salvage at least a second point from the weekend, a result necessary to hand Syracuse — by virtue of a tiebreaker — its first conference regular-season title in just its eighth season. The results also essentially clinched several major awards for the conference season, including Rachael Smith and Melissa Piacentini as the respective Rookie and Player of the Year, Nicole Renault as Top Defenseman, and Sibley a co-winner for Best Defensive Forward.
Yet, the objective is not to focus on Syracuse alone. “Definitely a game-by-game approach,” Alternate Captain Morgan Stacey said. “We try not to look too far ahead (or) overlook any of our opponents because everyone can play and … beat anyone, so ultimately we have long-term goals but we want to approach those just by winning every game, one game at a time.”
Meanwhile, the Lakers’ season got off to a strong start Sept. 24 at the Ice Center, converting a game with 21 penalties into a 7-3 exhibition win over Provincial Women’s Hockey League champion, Toronto.
“We were moving our feet … (and) capitalized on some of (our chances), which was good to get going earlier,” said Stacey. “We have seven freshmen. They can all play (and) compete, they all bring something different to the table, and most importantly, they can all compete and they all work really hard, so they fit right in with our systems and are definitely going to help us get to where we want to be.”
However, the script flips dramatically as sixth-ranked North Dakota arrives in Erie for a weekend showdown beginning this Friday to open the regular season for the 13th-ranked Lakers. Although North Dakota is not as well known for its women’s squad as it is for the defending and eight-time national champion men’s squad, the women did finish fourth in the Western Collegiate Hockey Association last year with a respectable 13-10-5 record in conference play and 18-12-5 overall, falling to eventual national champions Minnesota in the conference semifinal.
Stacey noted that the Lakers, surprisingly, are not out to prove anyone wrong by playing good hockey.
“We try to focus on what we can do and what we can control. We can’t really control what other people think about us, but North Dakota will be a really good test. … Obviously, the national polls do matter in-terms of making it to (the NCAA tournament), which is one of our goals, so we just want to control what we can control, have a really good game, and have a really good effort, and if we do what we can and play our systems, we know we can get the win.”