Lions, tigers and beers at the zoo? oh my 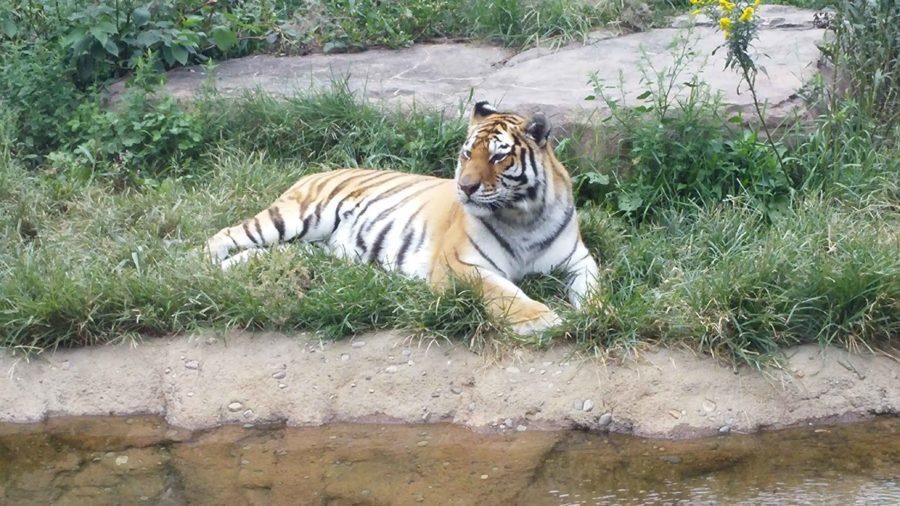 The Erie Zoo's Bengal tiger hangs out on a hot day by the water.

On Saturday, from 6 p.m. to 9 p.m., the Erie Zoo will host its first adult-only fall event. Erie Beer Co.is sponsoring the event, and there will be more than 12 breweries, both from Erie and from across the country, offering beer tastings throughout the zoo.
All attendees of the event will receive one sampling glass upon presenting their tickets at the gate, and they will be able to walk through the zoo to locate the different brewery stations. The zoo will be decorated for ZooBoo, the zoo’s annual Halloween event allowing kids to dress up in their costumes and trick-or-treat throughout the zoo.
Tickets for Lions, Tigers and Beers went on sale both online and at the zoo at the end of August, and they sold out within a matter of weeks. They sold for $25 per person for zoo members and $35 for nonmembers. There were also “designated driver” tickets available for $20, and they did not include a sampling glass for alcohol.
According to Emily Antolik Erie Zoo communication and event coordinator, the zoo’s carousel will also be open for business during the event, and there will be several food trucks stationed throughout the zoo. A portion of all food sales during the event will benefit the Erie Zoo.
The event coordination staff at the zoo, according to Antolik, was “thrilled” that the tickets sold out so quickly, and the hype already surrounding the event has everyone hopeful for more opportunities like it in the future.
Antolik said the event’s organizers are excited to start a possible new fall tradition. Fundraisers like this make the zoo’s daily activities and operations possible.
“(These events) are really important to the zoo. It’s a one-day event, and we make a lot of money that goes back into our general fund, so it goes into every aspect of the zoo, and that’s really helpful for us,” Antolik said.
This event is not the zoo’s first attempt at an adult-only fundraiser. Since 2005, the Erie Zoo has hosted GalapaZooza each June, and each year it remains one of the most sought-after ticket events in Erie.
The zoo hosts live music from various local bands and samples food from different restaurants around Erie. Like Lions, Tigers and Beers, a portion of the event’s proceeds goes toward the operations of the zoo.
When asked what she was most looking forward to in terms of the upcoming event, Antolik noted that this type of event allows adults to have the same kind of fun on Halloween as the kids.
“It’s just really fun for the adults. It’s like trick-r-treating around the zoo, but for beers,” Antolik said.
Although Lions, Tigers and Beers is sold out, Erie residents should still visit www.eriezoo.org to keep an eye out for upcoming fundraisers and events.