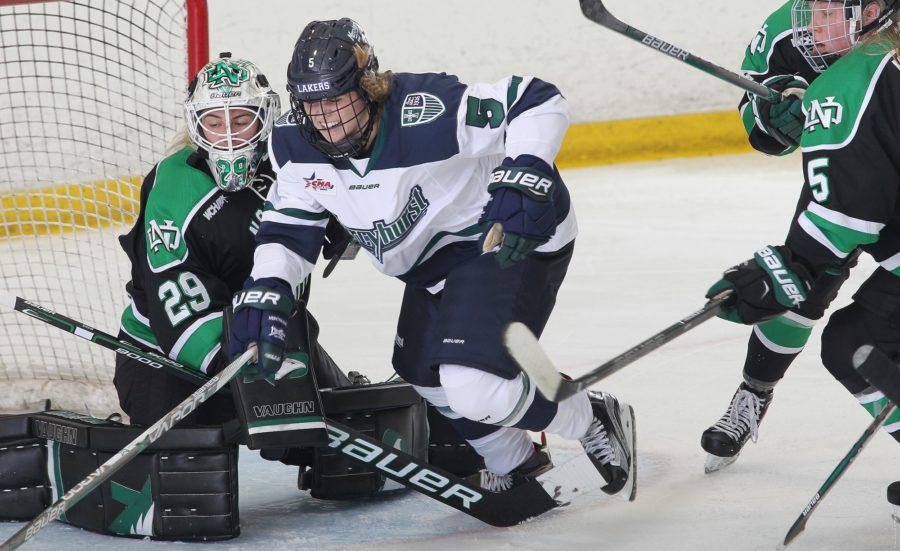 Just four minutes into the first period on Sept. 30, the ice was already broken.
The sixth-ranked Fighting Hawks of North Dakota were peppering Sarah McDonnell left and right, weaving through the defense with such ease that quite a challenge for No. 13 Mercyhurst was brewing before it even fired up. And three goals in the first period did not help matters.
But the Lakers responded after that barrage, holding the Hawks to just one goal over the remaining 125 minutes of hockey this past weekend at Mercyhurst Ice Center, salvaging a point in a 1-all draw on Oct. 1 after UND took a 3-1 affair on Sept. 30 in the Hawks’ first-ever trip to Erie.
“I thought (Mercyhurst) was a really great opponent, they worked really hard and they definitely gave us a really good first game,” commented the Hawks’ Halli Krzyzaniak. “It was awesome for us to play against them because I’ve never had the opportunity …and I was very impressed with their work ethic.” Krzyazaniak was responsible for that first goal just 3:56 into the new season, beating last year’s CHA Goaltending Trophy winner from the point on the man-advantage.
After scoring just one goal on 27 shots on Sept. 30 and allowing all three in the first, freshman Samantha Isbell beat Lexie Shaw immediately in front at 15:48 of the third on Oct. 1 for her first collegiate goal, allowing the Lakers to pull even and take a point from their first-ever series with North Dakota.
The Hawks got right to work on Sept. 30, as Brian Idalski’s squad didn’t miss a beat from last year’s campaign that ended in a loss to eventual national semifinalist Wisconsin, firing eight first-period shots at McDonnell and immediately taking advantage of mistakes and missed opportunities, including Michelle Robillard’s hooking only a minute before the first goal. Krzyzaniak caught a pass from Amy Menke as Lisa Marvin “took” McDonnell’s eyes off the play behind puck movement and some congestion in front of her, firing a wrist shot from the point through traffic.
The Lakers were then held to only one shot on three straight North Dakota penalties, and after Robillard was sent off for body-checking, negating a power-play and creating a 4-on-4 situation, Ryleigh Houston fired a hard shot that appeared to beat McDonnell above her right shoulder at 15:54. Amy Menke, the Hawks’ leading scorer last season, recorded her second assist of the period on the play after recording 21 last year. Things would only improve as Gracen Hirschy finished off McDonnell’s night just 1:58 later with her first of the season, scoring as she fell to the ice. “I think we got out to a really great start and it was good to get those three goals and give us … cushion going into the second.”
Meanwhile, on Oct. 1, Jessica Convery was able to keep the Hawks in check, allowing only a power-play goal at 15:47 of the first, this time from Anna Kilponen—the first of her career—with assists from Kayla Gardner and Jordan Hampton. The Fighting Hawks went a combined 3-for-12 on the man-advantage in the two games, compared with 1-for-15 for the Lakers, but killed off all but one of their 15 shorthanded opportunities. North Dakota had two different streaks of three consecutive penalties, one of them in the second period of Oct. 1, but all six were killed, not to mention a 5-on-3 opportunity eight minutes into the second. But Convery did finish with 23 saves on the night, wrapping up her weekend with 40 stops and a .58 goals-against average—just one goal allowed in just under 104 minutes of action. Overall, the Lakers’ defense was just as effective as they were in the second two periods on Friday, killing off five of their six penalties and dominating the faceoffs for a second straight contest, holding a 36-16 advantage after a 31-20 margin on Friday.
The Lakers’ offense did all it could to find their groove in the third period, firing 13 shots on first-star Shaw, who made 26 saves overall on Saturday. After Menke was sent off for slashing at 13:08, seven seconds after Taylor Accursi was called for a high-stick, the Lakers used the momentum from the ensuing 4-on-4 to start an offensive rush. The puck reached the stick of junior Brooke Hartwick as she circled around the point and found Isbell on the backdoor for the equalizer. “We were just watching Brooke skate around, I thought she was going to score, and then (Megan) Whiddon came in for some support, and then luckily we got one in, so it’s good to get one goal in for sure,” commented the freshman from Thunder Bay, Ontario. The tally stood up after two late flurries from the Lakers—one each at the end of the third and overtime—failed and again caused Shaw, this time with 26 saves on the night, to lose her shutout in the third period. “It was pretty cool…we worked hard today, it was definitely a better game than yesterday. … I thought we put in a lot more effort in this game…so we definitely came out harder today, so it was (a) better overall effort as a team.”
Interestingly, both teams saw their positioning on the national polls fall as a result of this series. The Fighting Hawks dropped one spot to No. 7 in the nation and return to action on Friday in their WCHA opener against St. Cloud State in St. Cloud, Minn. The Lakers, who dropped one spot to 14th, return on Oct. 14 when No. 3 Quinnipiac arrives at Mercyhurst Ice Center. The Bobcats moved one spot up from the preseason poll after dispatching Maine 5-4 and 3-0 in Hamden, Conn, over the weekend.