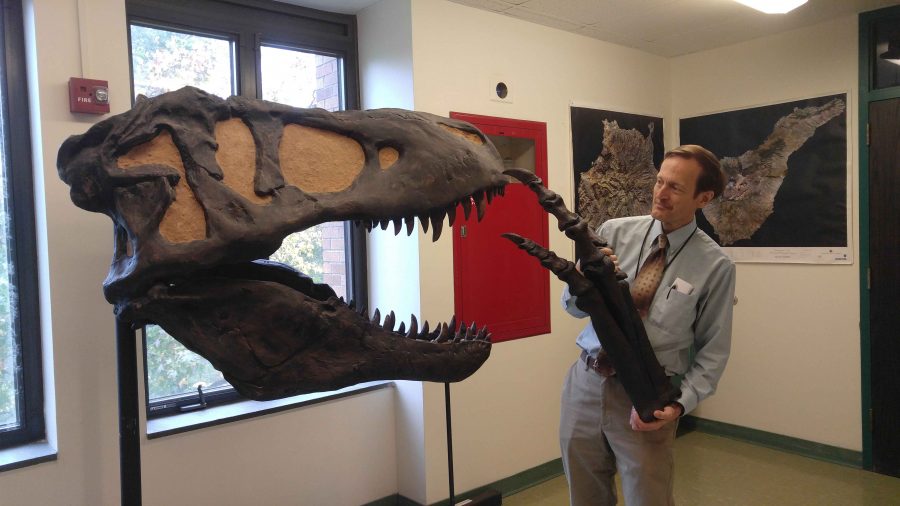 Scott McKenzie holding Tinker's foot next to an adult T. rex skull. Tinker's skull is about a third of the size as it is a juvenile.

At 62, Scott McKenzie has seen it all. As he enters his 30th year as a professor at Mercyhurst, he has certainly come across his share of both geologic relics and the next generation of prospective students seeking to follow in his footsteps.
It came to him as a relative surprise when he learned that a Tyrannosaurus rex was up next for display at the Tom Ridge Environmental Center. Known colloquially as “Tinker,” this nearly 60 percent-complete skeleton of a juvenile T. rex is the only one of its kind.
It was first discovered in 1997 in the Hell Creek Formation of South Dakota. The cast of Tinker was given to Mercyhurst after noted University of Pittsburgh Geologist Michael Sincak passed away in April 2014. McKenzie is now preparing the cast for display for the second time at the Tom Ridge Center.
“It’s unique in that aspect, (and) we’re the only ones that have the cast of it in these parts,” said McKenzie. “It’s a big animal, and it still had some growing to do.”
The actual specimen is currently being prepared for display in a museum in Germany.
Ten years ago, the entire skeleton was only 24 percent complete, but it had the majority of its 3-foot-long skull still intact, along with a skeleton of 20 vertebrae, at least seven ribs, the entire pelvic region and several other bones and claws.
The specimen is from the late Cretaceous period, specifically no later than 67 million years ago and was quickly identified as such.
As a juvenile, it possesses characteristics more related to an adult, namely 13 robust teeth in its lower jaw and 11 in its upper. This is the same as what it would have possessed at a more advanced age.
“The teeth of most predatory dinosaurs are recurved so that when T. rex bites into you, it’s very hard for you to struggle and get away without having a big lump of flesh and bone taken right out of you,” said Michael Deak, a sophomore Geology major who presented on a controversial species of dinosaur called the Nanotyrannus.
This is the most ambitious project that McKenzie has overseen. He is optimistic of the exposure the exhibit will receive, because this is such a unique opportunity for the area.
“You have to go to Cleveland, Pittsburgh, Denver, Washington or New York City to see something like that. They would have to purchase a cast like this, and right now there’s probably at least a six-month wait for something like that to be put together,” McKenzie said.
McKenzie believes that this will make a difference in the scientific community and help the country earn some standing in creating scientific literature.
“I think the main value is that it will awaken the enthusiastic 10-year-old child that sleeps within us all and get people excited with science. China and small countries like Holland and various other European countries are starting to really go full-bore on this and it’s time for us to reawaken that spirit that we’ve always had, and we’ve just got to get people excited about it so we continue to do that,” McKenzie said.
Deak agrees that this exhibit will bring more interest into science, whether a person becomes a geologist or paleontologist.
“The main part of our exhibit is that we’re going to get children involved in science. Dinosaurs are, in a sense, the gateway drug for children in science. It just has that ‘wow’ factor. They’re just so unique and alien to us that we just can’t get enough of them,” Deak said.
Assembly is set to commence later in October. Students will also be transporting other fossils to complement the skull, namely a triceratops cast from Zurn, a stegosaurus model, a nest with actual dinosaur eggs, coprolites, and other fossils to keep the public interested.
McKenzie says he is expecting between 1,000 and 3,000 people during the exhibition, and other displays have attracted nearly 500,000 people.
“If you want to go to see a dinosaur in one of the museums in Pittsburgh, Cleveland or Chicago, you’re probably talking $15 to $16 a head to see it. We’re providing it absolutely free for everybody, so this a wonderful opportunity for people to see this thing,” McKenzie said.
The exhibit opens on Nov. 7 on the second floor of the Ridge Center and runs through Feb. 24. Admission is free and will also include a screening of the 2016 movie “Walking with Dinosaurs.”